by Brian Hieggelke
August 9, 2007Filed under: 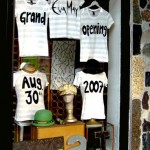 Eva May came to America in 1992 as a 21-year old woman with a knack for design. A native of Sweden, May arrived at the Ray College of Design in Chicago one step ahead of her fellow classmates. “I have been creating since I was a child, ” she says. “In Sweden it was obligatory for boys and girls to sew from third grade [on and I] always enjoyed it.”

Graduating a few years later, May wasted no time turning her talent into a career. “I graduated in 1995 and opened my own business,” she says. She began selling her designs in art shows and on Web sites (like the current etsy.com), and has continued to do so ever since. Today, however, she is putting the finishing touches on a postcard that will announce the grand opening of her very own studio in the decidedly Swedish neighborhood of Andersonville.

With the big day set for August 30th, May has definite decorating ideas. “I’d like to put a Swedish flag outside,” she says of her store. But don’t expect it to be stocked with solely Swedish-inspired threads.
“Swedish design is mostly known for certain colors and certain prints,” she says. “What I create…I’m sure has a little bit to do with my background, but I get my inspirations form everywhere.”

Combined with her sewing and textile skills, May is led to design what she calls “highly unique wearable art.” And like most artists, most of May’s creations are one of kind. “If they’re not, you’re going to see that
it’s hand-made,” she says. Take her best-selling silk screen t-shirts, for example. “They’re all hand silk-screened,” she says. “I do them myself.” May also hand washes and pre-shrinks the fabric so that the size you buy is the size you get.

While the shirts are not yet available on her evamay.com Web site, May promises to carry them in her store, along with the bags, scarves, hats and barrettes that will also be available. “I’m into wearing and appreciating
things that a person puts their soul into,” she says. “That’s what I like.” (Nicole Briese)