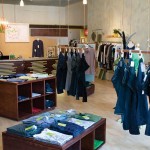 UPDATE: As of February 20, 2012, this store will be closing. Talks of a new spot are in the air, but nothing announced.

Goods: Women’s and men’s clothing, caps and bags. Designers: Cop.Copine, Shades of Greige, Dex, Skunkfunk, Wrath Arcane and Samuel Dong. Owners: Paul Chiemmongkoltip and Leena Thairuammit wanted to work in a place that would allow them to raise their baby boy Aubrey, as well as permit travel back and forth to Bangkok, where Leena used to live. Cutie-pie Aubrey is two months older than the shop, which opened in October, 2007. Vibe: The employees create a warm, friendly and welcoming feel in the clean store; it’s hip but not in an intimidating or pretentious way. Price Range: Inexpensive-Moderate. The Look: Sporty and urban chic in an everyday, versatile kind of style. Comfy hoodies, T-shirts, tank tops, jeans and sweaters flatter figures and have reasonable prices. Shopper’s Perks: The shop hosts events featuring art, clothing and more each month.