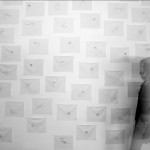 Kristin Frieman is above all a dressmaker and designer. Today, though, some of her stylized and theoretical “art dresses” stand in a corner waiting to be looked at, and never worn. “I like to think of fashion as a verb,” she says: the process of handling, feeling, evaluating the raw materials is central to her practice.

Frieman’s point of view is the fruit of many years on both sides of the academia-industry divide. In 1994, upon graduating with honors from the School of the Art Institute of Chicago, Frieman was awarded the Cornelia Steckl Fashion Fellowship and promptly went to Italy, where she interned at a knitting factory outside of Ancona, associated with the Moschino design house. The experience left its mark, a taste for being close to the site of labor: “For me, that’s where I’m happy, hands-on, in a factory,” like the one near Ancona. Her years in New York working in the mass-market fashion industry confirmed this preference for being near the source of production. At the Limited and other major companies where she worked, Frieman found that “ideas that were genuinely good were not heeded, because design decisions were made by whoever had the best x-ray vision into the next three months” of the seasonal production cycle.

While pursuing her day job as an assistant designer witnessing the ferocious power struggles over the color palette of the upcoming season, she actively collaborated with various artists, constructing garments for Lynn Book’s “Mercuria,” a performance piece that debuted at the MCA in 1997. She also created designs for “Gorgeous Fever” at The Kitchen in New York that same year. Frieman left New York in 2000, and began teaching in the Fashion Design department at the School of the Art Institute. Around the same time she set up her own mark, Red Shift Couture, a design and dressmaking concern that elevates the unique and the unrepeatable, and openly acknowledges a connection to the material world of production and consumption.

For some of her pieces, Frieman makes the rounds of thrift stores, selecting and salvaging grey wool sweaters. She takes them apart and puts the wool through a many-stage process of washing, and the result is a dense, felt-like fabric that she then uses in garments that are aesthetically charged and functional. The focus on salvage is not accidental. Each random piece of salvaged cloth is unique, with its own body and sizing, and moreover is the product of someone’s handiwork, somewhere in the world. This guarantees that each piece she produces will be unique and unrepeatable, and also will acknowledge that her work, in the end, is not “recycling” in the sense of repurposing refuse, but silent collaboration with whoever came before, and made the fabric she has rescued. (David Mark Wise)