by Brian Hieggelke
August 6, 2008Filed under: 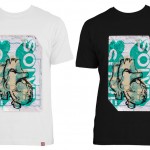 It’s the summer story that shook the street-art community. On the morning of June 14, 23-year-old Brendan Scanlan, a street artist who went by the name Solve, was stabbed to death in Logan Square in a late-night altercation.

“If you’re a street artist, you’ve met Solve,” says  Saro, a fellow street artist and good friend. “Solve was original, free-spirited, inventive, smart and taken well before his time. None of us will ever be the same.”

The street-art community quickly channeled their grief into preserving the memory of their friend and colleague. Within a few days of the incident, you could find “Solve RIP” painted all across Chicago sidewalks, and at the memorial service, a fellow street artist brought a handful of tees depicting Solve’s signature name design. The demand far outweighed the supply, and gave Saro the idea that a t-shirt devoted to Solve would be a fitting way to preserve his memory, as there has long been a connection between street artists and t-shirts. “T-shirts are a great way to express your character. In this case, tees are a great way to show that we’ve loved and lost a great friend,” Saro says. He contacted Ryan Waxenberg from Formula Werks and the two, with help from Solve’s family, began creating an image worthy of their friend.

Though the idea of using one of Solve’s best pieces, “A Soldier’s Memorial,” came to mind first, Saro says it defeated the purpose of the shirt. “Even though that piece is a traditional way to honor a soldier [Solve being like a soldier of street art], [we] just weren’t feeling it. I was tired of violence. So I found a picture of Solve’s heart paste-up. It fit perfectly in the scheme of things. It’ll be like we all have Solve’s heart with us.”

Saro and Waxenberg first released the shirt as a limited-edition “secret stash,” wanting to ensure that the first buyers got exactly what size and color they desired. Though the secret stash dries up on August 10, buyers can turn to the Formula Werks site, where plenty of extras will be available for purchase. Proceeds will benefit Brendan Scanlan’s family, who hope to create a scholarship in their son’s name at his high school in Madison, Wisconsin. (Molly Each)

Pick up a Solve t-shirt at solvelives.com or at formulawerks.com. $25 gets you a t-shirt, a button and a sticker pack, plus includes shipping.