by Brian Hieggelke
September 8, 2008Filed under: 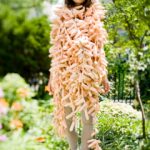 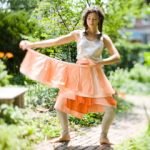 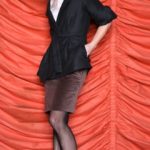 The concept of sustainability hit the mainstream fashion world about a year ago—probably at the moment last fall when the New York Times Magazine ran an eight-page spread on eco-friendly haute couture—so we’re sure to see a handful of environmentally minded designs gracing the runway at this year’s Fashion Week. However, in a mercurial business like clothing design, responsible production runs the risk of falling out of vogue faster than parachute pants. The very term sustainable fashion can sound like little more than a thinly veiled attempt by an industry not exactly renowned for social or environmental cognizance to slap the prefix eco- on its name and greenwash its conscience of the whole affair.

However, there are designers creating precise sketches of what ethical fashion should look like. One of the most exacting and beautiful examples comes from Anne Novotny’s Chicago-based line, Frei Designs. Novotny pays as close attention to the environmental and economic impact of her fabrics and dyes as she does to the shape and drape of each garment she creates. She selects fabrics woven only from natural, pesticide-free fibers, colored with organic dyes like madder root and logwood, and manufactured by workers paid a living wage. Novotny also makes a concerted effort to support small mills and U.S. manufacturers.

The benefits of a responsibly produced garment extend to each hand that touches it, from the farm to the consumer. “Cotton farms have to increase pesticide use each year because insects develop immunity to the chemicals,” Novotny tells me as we look through the spring collection in her Pilsen studio. “Workers are exposed to these toxins. So are we. They stay in the fibers; we put them against our skin…where we sweat. Not a smart idea.”

After graduating from the Art Institute in 2004, Novotny worked in fashion in New York. Two years later she returned to Chicago to start her own line. “I couldn’t be just another designer; I wanted to keep my business in line with my ethics. And there isn’t a lot of avant-garde, high-end sustainable fashion. It’s mostly yoga and baby wear.” It’s somewhat surprising that an industry with as sizable profit margins as haute couture hasn’t dabbled more seriously in the increasingly fashionable realms of environmental and economic justice. However, organic fabrics do still evoke for many an image of burlap sack dresses cinched with twine. And then there’s the infamous relationship between clothing manufacturing and exploited foreign labor.

Frei Designs is evidence that ethical practices produce beautiful results. The misconception that “hemp” is synonymous with “frumpy” is put to rest by the fluid, casual elegance of a black wrap jacket in the fall collection. A white silk blouse with pillowed neckline appears not to fall, but float about the torso and hips. Pieces by Frei are stocked at several boutiques in Chicago, including Florodora, Robin Richman, Asinimali and, of course, the city’s first eco-boutique, Pivot.

In the face of Novotny’s infectious convictions, there’s one question I still feel compelled, albeit reluctantly, to ask. Fortunately, she volunteers the answer before I figure out how to pose it. “The first thing I’m always asked is if I feel there’s an inherent contradiction in what I’m doing.” She pauses. “I can’t afford these clothes, but some people can. There are those who spend $400 on a skirt. They might as well spend that money paying a fair wage to the workers who made the skirt and purchase a high quality and beautiful piece that isn’t full of harmful chemicals.” On the flip side, thrifty fashionistas should consider the hidden costs in the deals found on the racks in the Gap and H&M. “You may pay $5 for a shirt at the Gap and feel like you’ve gotten a great deal. Everybody loves a deal, but you have to consider the cost of making that shirt, the cost of shipping it to the U.S. from Asia; how much of that $5 is going to labor? The true cost of that shirt is shouldered somewhere along the line.”

The Frei spring collection is inspired by Buddhist teachings; an ethereal three-tiered wrap skirt in gauzy shades of orange suggests a string of Tibetan prayer flags. An endless, chunky, boa-like scarf references the tale of Angulimala—a ruthless highwayman who vowed to kill 1000 people, collecting one finger from each victim and stringing them on a necklace to keep tally. His necklace held 999 digits when he met the Buddha and found enlightenment. Novotny is drawn to the tale because she likes the idea that “we can be 999 fingers down the wrong path and still change.