by Brian Hieggelke
September 15, 2008Filed under: 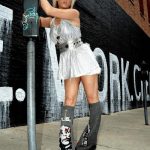 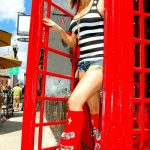 Fashion subcultures thrive around the edges of the “mainstream,” if mainstream can be described roughly as that first reflected in the pages of Vogue, then progressing through the cycle, eventually spreading to mythical Middle America, knocked off at Wal-Mart, and of course, then left for dead. Sometimes the subcultures cross over (think streetwear’s influence and its hip-hop origins), sometimes they even take over, but often they just carry on in a parallel world, content to go their own direction, or to riff on evolving trends in the mainstream.

Clubland and the fashions it spawns are one such arena. Sure Ed Hardy bought a page in the September Vogue, but that’s the exception more than the rule; nightlife couture tend to set its own agenda. Amanda Vix and Kerry Kucan know something about club fashion. Inspired by the prevalence of leggings  the last few years, they decided to take it up a notch and create their own handmade and silkscreened numbers. “We thought, ‘let’s make them more rock, less go-go dancer,'” says Vix, who’s also a photographer. “We used to work bottle service at Crobar, and anyone who saw them just loved them.”

And so, Bootlegher was born, here in Chicago. Ranging in price from $45 for the silkscreened version to $75-$100 for custom designs, the budding designers will be selling their wares at Another Level, and have started showing them off at fashion shows in nightclubs, like their event tonight at NV Penthouse. (Brian Hieggelke)