by Brian Hieggelke
October 7, 2008Filed under:

Every sport has its own fashion culture. Some such cultures are especially indecipherable to non-participants—what’s up with those tight spandex shirts with the Nascar-style designs that bicyclists wear, for example?—while some work their way into the more general fashion realm, fully detached from the athletic pursuit originally intended (think Air Jordans). This week, with the Chicago Marathon bringing 40,000 or so 26.2 milers along with their supporters to the frontline of the city’s consciousness, running gear will have its annual fifteen minutes of fashion focus. For its first-ever sponsorship of the Chicago Marathon, Nike has responded with seventy-five products designed for, or to commemorate, the big day. Some, like finisher t-shirts, will be available only to the select few and will be unveiled at the race, but most can be bought right now at Niketown or Nike.com. 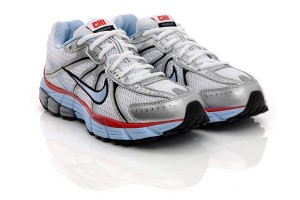 A few notable favorites include the twenty-fifth anniversary-edition Pegasus running shoes, which pay homage to the city with “CHI” on the tongue and the city flag on the heel, and the men’s short-sleeve Dri-Fit shirt with a neighborhood map. Dri-Fit, in fact, is one of those “insider” sacred cows to runners, who subscribe to the adage “cotton kills.” Nike’s shirts provide the most variety of marathon memorabilia, including a couple of shirts designed to recognize specific neighborhoods on the route, including Chinatown, mile twenty-one, and Wrigleyville, mile seven. Perhaps the most iconic, though, is the pizza-slice shirt, “Run it Chicago Style,” which perhaps appropriately, is not Dri-Fit. (Brian Hieggelke)