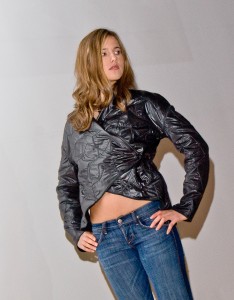 Fashion Focus Chicago is not broken, but everyone involved agrees, from designers to retailers to the woman in charge of it all, Chicago’s director of fashion arts and events, Melissa Gamble, that much can be done to take it to the next level. Here’s our list, based on interviews with all of the above, along with our own observations.

Make it spring
Fashion weeks held in the fall traditionally show spring designs; spring fashion weeks show fall. Fashion Focus Chicago mixes it up, to the confusion of the viewer and, likely, reducing its value for the buyers who are so vital to the development of the week into an essential force in the fashion world.

Make the shows thematically cohesive
Great fashion is always as much art as it is function, but sometimes the scales tip definitively in the direction of art projects. This is especially true in Chicago, where the School of the Art Institute wields considerable influence. By having art fashion mixed in with spring lines mixed in with fall lines mixed in with evening wear/bridal, some of the shows, while visually stimulating, left little practical for the viewer trying to evaluate trends or designers.

Double the number of shows, at least
The city constructs a fabulous tent in Millennium Park, complete with runway, seating, lights and sound, but it gets used for a mere five shows over seven days, each at 7:30pm. And some of those shows, like the Sister Cities show and the student show, while certainly entertaining, have little practical value for the working professional, whether the buyer or the press. Additional shows should be scheduled at 5pm or so, targeted at industry professionals, then let the “fun” shows that appeal to the general public take place at 7:30pm.

Don’t conflict with one of the “big four” fashion weeks
As Robin Richman, who owns one of the city’s most prominent boutiques, points out, “I did not attend because for some DUMB reason they always have it during Paris fashion week. That means: not just buyers from Chicago/ New York but mostly I feel for those designers who work so hard and even Barneys, Macys/department stores are all in Paris.” We can’t compete, and if our city’s top fashion emissaries, like Richman or Ikram, are not in town, then we can’t even begin to establish the “must-attend” character of our week. Timing is a challenge, of course, because the reigning NY-London-Milan-Paris run not only devours all of September and the beginning of October, but fatigue inevitably sets in for the professionals we want to reach. The end of August would beat the fatigue, but a later date would also likely work, especially if the show definitively shifts its focus to spring.

Improve the publicity machine
Several retailers cited the need for more marketing for the week, on all fronts, from engaging the general fashion-buying public, whether it be through a “huge screen on Michigan Avenue so people could watch the shows,” as Yoko Uozumi from Gamma Player suggests, or simply posters in store windows up and down Oak Street, as Barbara Nell from The Daisy Shop suggests. Although the city’s Brooke Vane did an outstanding job of harnessing the resources available to her, press efforts could also be improved in several ways. What constitutes a press corps in Chicago is made up of far too many “advertorial” publications who print on pretty paper but have little editorial credibility. While it may be a while before Vogue’s Anna Wintour takes a seat in the front row, the proliferation of daily news cycles driving many influential fashion blogs—some attached to the major print publications, like style.com, means a large appetite for fashion news. That appetite could be sated by posting press photos each night, organized by designer, along with a daily news bulletin. The Maria Pinto fashion show that was included in this year’s Allure of Couture was a potentially major media press hook that went wasted, given the level of interest in Michelle Obama’s style.

Put designers first
Right now, producers drive the shows: Gen Art, which uses the event as a fund-raiser; World Fashion Chicago, which promotes the city’s Sister Cities program; Dress Code, produced by the city’s four college-level fashion programs; Macy’s, which pushes designers it’s willing to sell or incubate; and, with the Allure of Couture, two very established players on the city’s fashion scene, Barbara Samuels and Nick Cave. But to make the shows newsworthy as more than a search for new talent, we need to see designers returning to the runway year after year, so that the buyers, press and public can begin to develop real relationships with the designers. The big impediment to this is cost. According to Gamble, the producer’s cost of a runway show at Millennium Park right now runs to $70-100,000 per show. (The common elements are pro rated between each show, and each picks up its own cost for event producers, models, music, etc.) While that’s cheap compared to what New York designers are paying in Bryant Park, which Gamble estimates as at least $250,000, and sometimes as high as a million dollars, the eyes of the fashion world are on those shows, which perhaps justifies their costs. Chicago ain’t there yet. Thanks to in-kind sponsorships from Lancome and Mario Tricocci this year, the shows didn’t have to bear the cost of hair and makeup, but even a bare-bones show, with lots of donated products and services, would cost a designer between $20,000 and $40,000 to execute, Gamble estimates. Of course, many New York fashion shows take place outside of Bryant Park and that’s certainly an option in Chicago, but it seems like a shame for the tent at Millennium Park to go so under-used. If “bureaucratic” expenses can’t be avoided, the city should seek out nearby alternative venues, like the Cultural Center, and actively schedule and promote designer-specific shows. Gamble agrees with this imperative and is seeking proposals from designers to do just that. She points out that, this year, designer Alice Berry presented Fashion Focus Chicago’s first solo designer show (pictured), albeit not on the runway but in a performance-oriented forum at the Cultural Center.

Run a small trade show during Fashion Focus
Most boutique owners we know travel to trade shows like Magic and Pool in Las Vegas to do their buying, but why not create an easy buying forum for them during Fashion Focus, but offering only Chicago designers? It might be a considerable challenge to get the major New York buyers to add Chicago’s show to their fall routine, but boutique owners from all over the Midwest might find a fall trip to Chicago, combining the fashion shows and a buying opportunity for some terrific, underexposed fashion lines irresistible. And it would provide a way to add continuity between the shows at night and activity by day, since many emerging Chicago designers do not have proper ateliers yet to receive buyers and the press.

Start a spring show
Even if it means scaling fall back a bit, we need a spring Fashion Focus to highlight fall lines.

Get the rights to the name Chicago Fashion Week
Although an independent promoter owns the rights to the chicagofashionweek.com domain and claims a trademark, that group has been a blight on the city’s efforts. This year, they gained a sponsorship from Master Card, then canceled most of their events at the last minute, leaving participating designers in a bad spot. But everyone calls Fashion Focus fashion week, and it’s time to clear up the confusion. And we have every confidence that the mayor with all his power can make it happen. After all, his father once famously told the Chicago Bears they’d have to stop using the city’s name if they moved to the suburbs and they stayed put.

[…] Fixing Fashion Focus Chicago – While it may be a while before Vogueâ€™s Anna Wintour takes a seat in the front row, the proliferation of daily news cycles driving many influential fashion blogsâ€”some attached to the major print publications, like style.com, … […]

Incredible and realistic suggestions. A fashion week like that would really help Chicago designers. I’d love to participate in a tradeshow to promote my line. Thanks for writing a really great article. I hope the city takes your recommendations.
Kirsten Goede
http://www.modernsparkle.com
http://www.objetsdenvy.com