by Brian Hieggelke
October 28, 2008Filed under: 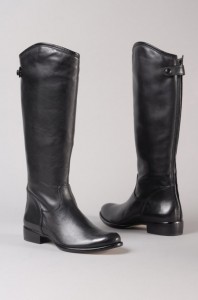 Though clothing is a necessity, fashion is a luxury. If the industry depends on our fixation with glamour, frivolity, escapism, fantasy and money, how does America dress itself when we’re suffering from a deficit in all of the above? Opinions abound on how dire economic trends are steering fashion trends this season, but one thing’s for certain: prepare for a fashion season branded with the B-word—basics. Basic garments, basic colors, basic footwear, basic spending habits. When it comes to living in an economic downturn, our full-length mirror is shaped just like square one.

“Right now, people are purchasing things that are classic and that are never going to go out of style because they know that next year, next spring, next fall, it’s something they can still pull out of their closet,” says Sarah Herold, shoe manager and stylist at the Akira Chicago women’s boutique on Diversey. “People aren’t nearly as willing to jump aboard on trends, especially if it’s going to cost a little more.”

Herold points to shoes as an example: though fringe is one of the latest hot trends on the shelves, customers are walking off in Akira’s more fashionably durable riding boots instead.

So buyers are responding to a recession with reasonable behavior: they’re spending safer and spending less. Designers are doing their best to keep up. “I think that many designers are going back to basics in an effort to make versatile pieces that can support any wardrobe,” says Jote Kaur Mahern, designer for Sunia Natural Fibers. Chicago-based designer Sarah Matouchi notes that even the fashion press is trying to stay accessible: “When I picked up the latest issue of Vogue, they had a section about shopping on a budget…and the average fashion magazine reader knows there’s nothing budget about Vogue. I feel the industry is definitely trying its best to survive this crisis, and the only way to do that is to be smart about what people really need right now.”

As a result, on the runways last month—in Chicago as well as major fashion capitals New York, Paris and Milan—collections were splashed with separates rendered in blacks, whites, beiges or more subdued and classic patterns like plaid. (Have you been noticing the preponderance of plaid jackets on pedestrians this season?) Some designers took the mood of the global economy one step further with hard-edged sci-fi-themed garments. One of the most-talked-about collections, Nicolas Ghesquiere’s stunning Spring 2009 line for Balenciaga, presented a flock of models who looked like an army of strange, destructive robots. In an interview with Style.com, actress Selma Hayek likened them to a “new race—the Balenciaga race.” Are we officially in the age of dystopia chic?
On a less extreme level, Dannia Altemimei, a 20-year-old undergrad attending Loyola, notices that trends among her fashion-conscious pals are also veering back toward the dark and angry: “Grunge is totally coming back in, like with destroyed jeans, flannel shirts, plaid and neutral colors,” she observes. “I really think it has to do with how our generation feels about the country, because the last time the style came about, it was Gen X, who totally had no faith in government.” She also points out that the style is relatively inexpensive to produce and maintain.

Basic black, sci-fi, grunge—the fashion landscape can’t be all this depressing, can it? On the contrary. Several clothiers and their customers are supporting cheery optimism in the face of the country’s current economic crisis. “I find color all over the market, which might indicate the wish for change,” says Marsha Brenner, executive director of Apparel Industry Board, Inc., who doesn’t believe that the economy is driving current fashion trends on a significant level. “Those that drive the industry—the consumers—merely want a little color in their lives.” 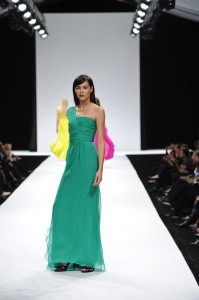 Last month during Fashion Focus Chicago’s Allure of Couture show, the ready-to-wear line Vatit Itthi presented a standout collection rendered in basic neutrals as well as bright and vibrant colors—colors that actually moved the audience to applause upon their gradual appearance on the runway. “When we showed our Spring and Summer 2009 lines both in Chicago and Bangkok [at Elle Fashion Week], the response of the audience to the bright color section was overwhelming,” says co-creator Vatit Virashpanth. “The situation of the world economy right now is kind of boring for a lot of people. For us now, anything that can make us feel a little bit lighter, let’s do it. Beautiful things help. Trust us.”