by Brian Hieggelke
November 13, 2008Filed under: 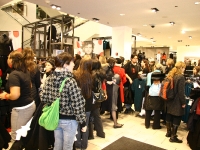 Thursday morning 4:30am and the diehard fans have already set up camp. Four-and-a-half hours later, a line of nearly a hundred stretches halfway down the block, then rushes through the open glass doors at 840 North Michigan Avenue. The occasion? The release of Comme des Garçons at H&M. The collaboration between H&M and Rei Kawakubo, head designer at Comme des Garçons, is the most cutting-edge diffusion line to emerge yet from the international retailer. The series of H&M designer collaborations offers exclusive labels at affordable price points, luring label devotees as well as a younger generation of fashion-savvy shoppers. Past designer lines like Roberto Cavalli and Stella McCartney each sold out in minutes. 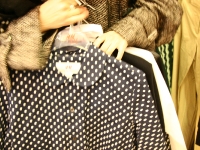 The mood is gleeful and good-spirited despite the mayhem that ensues as the store’s doors open. Running to a cramped square area in the middle of the store, shoppers grab indiscriminately at the limited quantity of garments in the Comme des Garçons line. “It was just grab now, figure it out later,” says Lisanne Dickson, who had arrived at 7am. “I’ve been a fan of the line for six or so years now,” she adds, “and I am used to paying higher prices for Comme des Garcons so this is great. ” Echoing her sentiment is shopper Vanessa Vitale. “I grabbed whatever I could,” Vitale confides. “It was elbows out; people were crawling all over. ”  Local fashion designers Chris and Shane (who decline to give last names) describe the event as “good fun.” Shane says, “I got exactly what I wanted,” holding up a shopping bag that contains two pairs of shoes and a blazer. 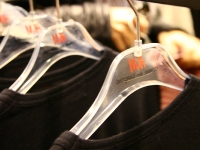 Kawakubo is known for pushing fashion boundaries, but Comme des Garçons for H&M is relatively tame. Most articles are straightforward, such as the polka-dot button-down shirts, wool trench coats, crisp blazers and, a huge favorite, the black riding coat with tails. The most puzzling and conceptual piece is a pair of pants with a dangling crotch that reaches the knees. Kawakubo’s craftsmanship and touch came through in the garments’ visibly tailored fits, quirky hemlines and quality fabrics, all of which hint that these are no ordinary H&M pieces. 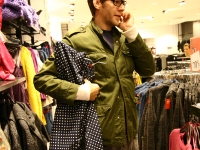 By 9:20am the collection has been thoroughly picked over and a few lonely shirts hang on a rack. The crowd disperses, leaving neither trace of the chaotic scene that occurred only minutes earlier, nor of Kawakubo’s coveted designs. But given the massive successes H&M has seen with diffusion lines, it’s a safe bet that there will be more to come. Meanwhile, Target is teaming up with indie darling Thakoon; that collection will be released in December. (Kari Skaflen)