by Brian Hieggelke
December 5, 2008Filed under: 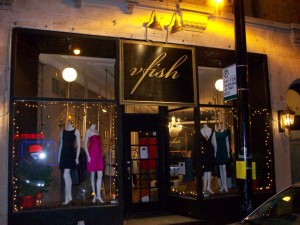 Chicago designer Mandy Moise dreamed of seeing her fashions on display, but it wasn’t the runway she aspired to—it was the sidewalk. Launching her vfish label in September 2007, Moise knew her designs were selling, but never got to see the finished product. “I never see anyone wearing my clothes!” she said to husband and vfish co-owner, Tal Moise. Having sold over 100,000 pieces, it certainly wasn’t for lack of interest. The solution? Open a flagship store two-and-a-half blocks from the Moise’s home, of course. “I was like, I think I know how to stop this!” Tal jokes.

While the line does “97-plus percent” of its business in other boutiques, (403 currently carry the line) Tal says the flagship store was also put in place to hear feedback from real live customers, a concept the line was designed around. “These are meant for real people,” Tal says of the vfish pieces. Inspired by people’s frustrations with clothing in general from lack of fit to lack of quality, Tal says he and Mandy wanted to prevent and correct those problems in their own line. “We wanted to know what works and what doesn’t, because that’s some of the feedback you don’t get when you’re not dealing with the end consumer.”

Customers ultimately also benefit. “The store is one of the only boutiques where you can see the entire collection [and] if you come during the week…you have at least one of the designers here if you want feedback,” Tal says.

Ranging in price from about $32 for a spring tunic to $179 for the Hayden coat, the designs themselves are as classic and elegant as Vera Fishbaugh, Mandy’s late grandmother and the label’s own namesake. A former illustrator of Minnie Mouse for Disney, Fishbaugh’s photos adorn the store’s walls with an air of old Hollywood glamour. Sticking to basic-but-pretty knits, the vfish collection follows suit. Fitted mini dresses and soft sweaters dominate the line in solid colors and largely washable materials. “We don’t like spending on dry cleaning,” Tal explains. “Nobody really does.” Using a mixture of cotton, modal and spandex, vfish has found a formula that pairs aesthetics with durability. “You can wash it and it doesn’t shrink, it won’t pill, it won’t lose color,” Tal says. “We really focus on quality. [It’s all about] finding something that a woman is comfortable in and that you would want to wear.” (Nicole Briese)