by Brian Hieggelke
December 15, 2008Filed under: 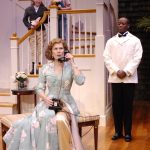 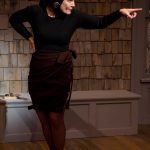 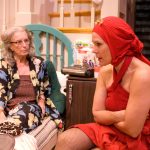 She wraps her head in a Persian shawl. The fabric once decorated the wall of her mother’s now-dilapidated mansion. As the walls crumble, Little Edie twists the shawl into a headdress and sinks into self-imposed isolation.

Little Edie Beale and Big Edith Bouvier Beale were the cousin and aunt of Jackie Bouvier Kennedy Onassis. They shared a glamorous life of manicured gardens, horseback-riding lessons and society balls in East Hampton. Jackie married a future President, but Little Edie became a creative, dysfunctional adult living in squalor with her indomitable mother Big Edith.
The life and fashions of the eccentric daughter and mother come to life in “Grey Gardens,” a 1975 documentary film turned into a Tony Award-winning Broadway musical now in its Chicago premiere at Northlight Theatre, directed by BJ Jones. The  film has long been a cult favorite and something of a legend in the fashion world, which raised the stakes, costume-wise, for its theatrical adaptation. The costumes in Act One reflect the carefree gaiety of 1941, while those in Act Two show the mental imbalance and deteriorating living conditions of the mother and daughter in 1973.

“Ultimately, we had to create two worlds,” costume designer Jacqueline Firkins says. For the first act, she brought 1940s glamour to the stage, based on photos of the period. Hollis Resnik dazzles as Big Edith in a flowing green silk caftan that Firkins rented. Handmade matching gold silk slacks wink beneath the frock. “Not many pieces match the script,” Firkins says. “With Act One, we made up a lot more. There isn’t exactly a photo of the mother in the kimono in her loungewear.”

In an engagement party scene, Resnik sports a pink custom-fitted 1940s dress purchased from a vintage shop. Young Edie sashays in a pale blue taffeta ball gown constructed by Firkins’ students at Loyola, where she teaches. Four strands of pale green pearls accent the dress. Ayla’s Originals in Evanston loaned the necklace to Northlight Theatre, and the theater promised to lock it up at night for the duration of the play. Earlier, Little Edie prances in navy-and-white-striped peek-toe pumps fastened with navy bows, borrowed from a Loyola production of “Guys and Dolls.”

For Act Two, Firkins’ designs reflect unhinged creativity. Grey Gardens mansion has deteriorated into a broken version of its former self, its garden overgrown with weeds and house overrun with cats, raccoons and garbage. Big Edith and Little Edie are broke recluses. Firkins watched the movie online and did freeze frames to copy the bizarre fashions. “We had to realize that people who know the cult film, know it really well. The challenge was to make sure the pieces looked as true to the film as possible,” she says.

The elderly Big Edith, expertly played by Ann Whitney, drapes men’s shirts over her chest, ties the sleeves in back, and throws a kimono housecoat over the ensemble. Little Edie’s skewed sense of reality bubbles to the surface in her bohemian oddball style of dress. She wears a series of red pieces called a marching outfit. Her girdle-like shorts are layered over ripped fishnet panty hose. On top of that is a cashmere skirt flipped upside-down, the seams cut open, the sides fastened with huge safety pins. This was how Little Edie dressed in East Hampton in 1973—three years before the Sex Pistols gave birth to the punk rock movement in the U.K.

Twisted sweaters or bath towels wrap around Little Edie’s head. Due to quick costume changes, Firkin says, “You have to fake it. You have to simulate the idea.” The head scarves are decorated with decorative gold brooches bought from Grey Gardens Online. Ayla created one in conjunction with the play; it is on display in the theater lobby and sells for $250.

Little Edie referred to her style of dress as revolutionary, and it may well be so. Designer Todd Oldham mentioned her as an influence, and John Bartlett said he watches the “Grey Gardens” documentary every four months. Jennifer Lopez has imitated Little Edie’s head wraps. In October 2007, Harper’s Bazaar featured a “Grey Gardens” fashion-inspired layout of Lauren Hutton and Mary-Kate Olsen. In September 2008, Italian Vogue wrote about Edie Bouvier Beale and posted photos of her fashion style.
Little Edie’s style, and her story, live on in film. The 1975 documentary film “Grey Gardens” by the Maysles brothers captured the bickering, codependent pair shortly after the health department raided their home. The 2006 sequel, “The Beales of Grey Gardens,” contained unreleased footage from the 1970s. The documentary about the making of the Tony award-winning musical (“Grey Gardens: From East Hampton to Broadway”), premieres on PBS on December 23, 2008. And then, of course, there is the Hollywood adaptation. Drew Barrymore and Jessica Lange star as the eccentric daughter and mother in that movie, to be released in 2009.