by Brian Hieggelke
January 12, 2009Filed under: 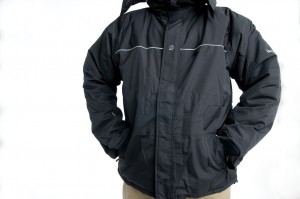 A box of turtles and a hardcover book. That’s what I seek for my father and pretty much all he wants. I drop in at Margie’s Candies and Women & Children First Bookstore, select my gifts and I’m done. Not the Sterns. Last winter, they ordered a pair of carbon-based heated gloves from Blazewear, a British company established in 2005. They had them shipped to their father. He liked them; he really liked them.

Soon father Joel said to son Jeff, “Let’s import these gloves.” Joel Stern approached Blazewear, and worked out a sole distributorship for the U.S. and Canada. He partnered with Jeff, who had worked in mortgage lending, and Jeff’s friend Paul Chernawsky, who had a legal background and set up shop here in Chicago.

“Jeff and I are both very entrepreneurial in spirit,” Chernawsky says. “We put the business model in place in October, and we started getting orders through word of mouth right away.” Jeff and Paul manage Blazewear USA’s marketing, order fulfillment and shipping. Joel interacts with Blazewear’s British office. Their straightforward CTA billboard ads read, “Cold?” against a blue background, followed by “www.heatedclothes.com” on an orange background.
Blazewear’s heated clothes have rechargeable battery packs tucked away in the lining. Their waterproof, fleece-lined Taslan Nylon jacket is specially priced at $169.99. “It’s a very reasonable price for a jacket, let alone a heated jacket,” Chernawsky says. “The jacket has five different heat settings. The heat will last for seven consecutive hours with three as the setting.” That should be long enough for me to go to a Bears game, shovel my driveway and chase my dog Marley around in the snow.

Oh wait, I don’t have a dog. But I do ski. Jeff Stern says the heated gators, socks and insoles that skiers favor “are so popular we sold out of them for this season.” Heated gloves are still in stock though; they are $61.99 for basic black, and $73.99 for deluxe black and grey. The gloves require a separate battery pack that costs $79.99, and includes two slim-line batteries and a dual charger. 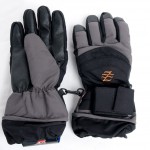 Blazewear works equally well for construction workers, snowmobilers and crossing guards, and is finding a niche, Chernawsky says. “At a time when the economy is tough, our product is selling. There isn’t really anything on the market that can keep you warm like this.” (Sarah Klose)