by Brian Hieggelke
February 17, 2009Filed under: 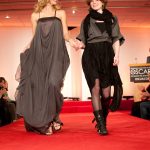 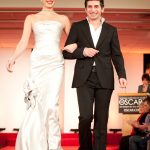 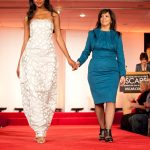 “Who are you wearing?” With the biggest night in Hollywood fast approaching, the stars are surely scrambling to find the answer to that question—the one that will inevitably cross the path of every stiletto to hit the red carpet. The Academy Awards and fashion have always gone hand in hand, and this year will be no exception. While producers routinely tip their hats to the undeniable union with their annual fashion preview, however, this year will be unique—it won’t just be the Valentinos and the de la Rentas that are featured on Sunday. It will also be the unsung local fashion mavens from cities like our very own.

Launching the very first Oscars Designer Challenge, producers have recruited seven up-and-coming designers to go head to head for the opportunity to have their original gown worn onstage by an Oscars escort. The nominees, chosen for their relatively low profiles, herald from New York, Los Angeles and Chicago—three of the seven have significant connections to the Windy City. First Lady favorite Maria Pinto is competing, along with local designer Sam Kori George and Evanston native Moire Conroy.

While Pinto has been publicized for her most high-profile fan, and George and Conroy have both had their share of success in the business, George for one, thinks winning the competition would open a lot of doors. “I think it [would] give me a lot more credibility,” he says. Having been in the business for six years, he says being a nominee has already garnered more of a national interest. “I don’t have a problem working under the radar—I get to do what I love 100 percent of the time. [But] it would be very, very nice to be recognized for that,” he says.

Hailing from the School of the Art Institute of Chicago, all three share similar roots, but bring very different designs to the competition. “It was a myriad of things that people brought,” George says. “I think every person there did what they do best.”

Conroy says her Oscars creation was inspired by her spring/summer 2009 concept—1960s Summer of Love. “It was really based on an idea of revolution and change…and modernizing those terms into what we’re experiencing today,” she says. “I wanted to be very romantic and really express what that time meant—basically love, freedom and beauty.” Her flowing grayish-blue design emphasizes her strength—drapes. “Everything I do comes from a sort of romantic place,” she says. “Draping is really my strong point.” Given her choice, Conroy says she’d swathe Oscar nominee Angelina Jolie. “I can totally see her wearing [this] gown.”

George, who is used to designing custom pieces, had to think on a broader scale. While he knew he wanted to design “something strapless and elegant,” he did not have the luxury of meeting his “client”—he had to create a dress that would work for any model. After fittings with several local agencies and several different girls, all of whom found the dress flattering, he knew he had a winner. “It works with a lot of different personalities,” he says. “This dress is the skin and bones—anyone can wear it.”

After showcasing their designs to members of the entertainment and fashion press in Los Angeles on February 10, the fate of the designers was ultimately decided by the public. Online polls at oscar.com closed on February 17, with the winner set to be announced prior to the awards ceremony during the “Oscars Red Carpet 2009.”

Could one of these three put our city on the fashion map? It depends. While the talent is obviously here, both Conroy and George agree that Chicago still has a long way to go. “The number one issue is resources,” George says. In order to finish his gown for the competition alone, he had to fly to New York for a day just to find fabric. Conroy recently made the move to New York for similar reasons. “It’s hard to develop something in a country where’s there’s already another city that’s really a fashion capital,” she says.

[…] Chicago on the Carpet: Local designers have stars in their eyes […]