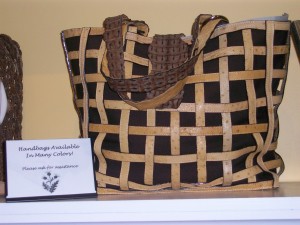 The economy is still hitting hard, but Maria Alfaro-Brooks is hitting right back. The owner of Julian Gifts in Roscoe Village, Alfaro-Brooks is taking an alternate approach to the closing doors of her peers—reinvention. Over the past month, she’s taken her popular Euro-inspired gift shop and intertwined it with Celia’s Closet, an “upscale resale” shop driven by her best clients. “I called my clients and told them what I wanted to do, and they thought it was a great idea,” she says. “They started bringing in their consignment pieces, cleaning out their closets.” Combining the new lines of handbags, home décor and accessories of Julian Gifts with the resale clothing and shoes of Celia’s Closet, Alfaro-Brooks had a whole new angle. “I basically kind of meshed the two together and it actually worked really well,” she says.

Born in Madrid, Alfaro-Brooks brought her European flair to Chicago five years ago with Julian Gifts, a strictly corporate private business. “Companies come to me and they give me a budget and…say ‘pick something fabulous for us,’ ” she says. With a largely female clientele, Alfaro-Brooks soon had a large demand for a retail locale.

Taking up residence in her own neighborhood a year and a half ago, Alfaro-Brooks has introduced unique, high-quality brands to her customers from countries like Italy, France and, of course, Spain since 2007. Debuting Celia’s Closet in February, she’s now introducing them to each other’s closets. “My clients have been very loyal in bringing in things that are new or that are hardly worn,” she says. “They have brought in things that are like $10 and they have brought in things that are like $2000.” Offering a check to the owners of items that sell in the first thirty days and the option to take back or reduce pricing on items that don’t, Alfaro-Brooks says the businesses help each other out, just like their namesakes: her mother and father. “Celia is gonna help Julian through this,” she jokes.

In addition to resale, Alfaro-Brooks is working with vendors to keep price points down on newer items—something she says is simply a necessity in this economy. “People are not buying $900 bags,” she says. “[They] want to still buy and feel good about shopping, but at the same time they don’t want to spend a fortune.”

Alfaro-Brooks, for one, won’t go down without a fight. “You really have to work it,” she says. “We’re all in the same boat.” (Nicole Briese)