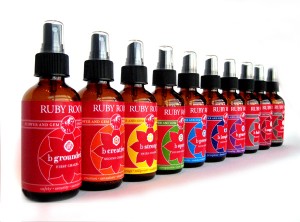 Any salon can give you a makeover, but The Ruby Room is upping the ante. They don’t want to just do your hair and put on your makeup—they want to make over your soul.

In introducing their own “Essence Collection, ” the style and wellness center has launched a full line of “aroma-infused flower and gem essences” designed to correspond the “seven energy centers of the body”—the chakras—and ultimately create a higher sense of wellbeing.

“We were working with the essences in the past, and we wanted to create our own,” says Ruby Room’s intuitive energy healer, Philip Clark. “We already knew the qualities of each chakra…we also understood essences and crystals,” he says. Using that knowledge to create scents and “energies,” Clark says the aroma-infused sprays work mainly by entering a person’s aura.

“The aura is arm’s length on the average all around the body,” Clark says. “When we work with the essences we spray them over the head and into the aura, and then we instruct the individual to inhale deeply and bring that aroma all the way through the body and into the feet…That process automatically begins to fill the aura and supply the body with the energy of each of the essences,” he says.

With essences like “B Grounded,” “B Creative” and “B Strong,” Clark says the collection is best used with the accompanying gem kits Ruby Room has created to work in conjunction with one another. “The crystals represent a frozen state of the energy,” he explains. “By learning the qualities of the crystals and accepting that myself, I can begin to now benefit and take that on also as support.”

Not sure which essence is for you? Clark says he and the Ruby Room team are there to help. “We look at their aura and we might see imbalances in the root chakra or in the solar plexus chakra—now we can begin to physically help them see that they are addressing it in addition to managing their bodies and their feelings.”

With a price range well under $40, the collection makes what Clark refers to as “intuitive exploration” affordable for all—even the skeptics. “It’s really wanting to help people as opposed to create fear and the superstition,” he says. As Clark puts it, working with the essences is “not changing anyone’s religion—as a matter of fact, it validates it.” (Nicole Briese)