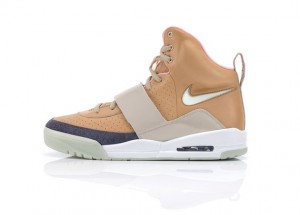 A sunny Saturday afternoon and you, clueless you, think it a nice day for shopping for a new pair of kicks. You arrive at Saint Alfred’s, that Wicker Park sneaker shop you’ve been hearing about, and find the security grate closed. Oh no! Has the economy taken them out too? A couple of teenagers, immaculately attired and topped out in LDRS hats, seem unperturbed; they take advantage  of the large Saint Alfred logo painted on the outside of the grate to take some snaps in front.

Silly you: the action here was all last night, when the latest edition of the Nike Air Yeezy releases kept the crowd of sneakerheads at sway till round about four in the morning, after opening at 12:01am. Yeezy is a ultra-limited-edition series being designed by hip-hop star and renowned clotheshorse Kanye West, and the “limited” part means forget about it, they’re all gone (though trading on eBay north of $600 a pair, up from $215 list, but even retail upcharges from there). But don’t despair your oversight: many of the two dozen or so who camped out, some for two days, at Saint Alfred’s (or Leaders nearby) for the black-on-black edition went home shoeless—the store had less than twenty pairs in total to dispense. You’ve  got at least one more chance to rock like ‘Ye, when the third color combination, the  “Net/Net” (pictured) gets released the first week of June. You may want to get in line now. (Brian Hieggelke)