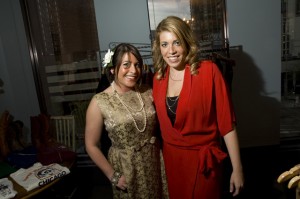 Trends come and go, but elegance never goes out of style—and sisters and co-owners Ashley Zisook and Allison Zisook Goldstein are reintroducing that element to the Windy City with their vintage boutique, Sofia. Ashley says she and her sister named the store for Hollywood goddess Sophia Loren (her given name is actually Sofia). “She is the epitome of beauty, class and glamour; all of the qualities that the store embodies,” Allison says in the store’s press release.

Sharing a love of vintage that began in their grandmother’s closet as children, Ashley says she and Allison aim to bring back the grace of eras like the fifties and sixties. “Girls don’t have to wear tiny little dresses with their boobs hanging out to look pretty,” she says. “We’re bringing back those dress lines and shapes from [those eras].”

Filling what Ashley calls a void in the Chicago vintage market, Sofia is open to the public only on Thursday or else by appointment in an office building in the heart of Gold Coast, making it a bit of a hidden gem—Ashley says the store is “something you kind of have to know about—but those that do will find what she proudly calls “the best of the best.” “We handpick every single item,” she explains. “It’s not like you’re flipping through a packed rack…whether it be a t-shirt or an evening gown, it’s there for a reason.”

Collecting pieces that set the store far apart from your typical Goodwill or Salvation Army, Ashley says her and Allison split up the buying equally to reflect their very different tastes. “We’re very different in the way we dress, in our styles, in what we like,” she says. “Everything is kind of both of our coming together.”

The formula seems to be working—after just one month, the sisters have already been invited to do a pop-up show in Soho in New York. “It’s just crazy response for how recent we’ve been open,” Ashley says.

For those hesitant to venture into the forays of vintage, Ashley is there to help: she also offers personal shopping and styling to all Sofia patrons. “The most important thing for me is my customers feeling good about themselves and feeling comfortable with what they’re wearing,” she says. “I think that if you find something and you like it, and it’s a vintage piece and it fits you? It’s made for you.” (Nicole Briese)