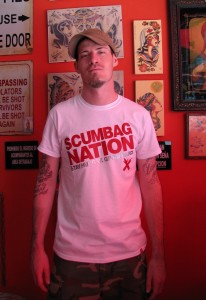 Ordinarily you don’t think about community building when you are building your personal wardrobe, but, according to Formula Werks owner and artist Escape 76, his fashion line does exactly that—“creates a loose community of folks who ‘get it,’” who are “different, original, unique and don’t really care what others think.” A Chicago-based fashion company proud of its collaborative projects and independent streak, Formula Werks includes a group of artists who have decided that some of their work should be displayed on human beings, rather than in museums, who design a fashion line and create “wearable glory for the angry, unappreciated, and self-indulgent” while “having fun with their friends” in the art world, with a group of friends that includes both world-famous artists and local companies like Rotofugi Designer Toy Store and Gallery. Both socially conscious and irreverent, Formula Werks sponsors new artists from around the city, and creates spunky T-shirt designs that run the gamut from crude to funny to serious, ranging from slogans like “Fuck you” and “Scumbag Nation,” to images of Abraham Lincoln as a pirate (via Rotofugi), to declarations that people “better recognize” Chicago, to messages supporting the Iranian political protestors and Cancer survivors. Formula Werks refuses to cater to a niche of customers, and Escape 76 says that, because of this, “it’s amazing to watch people come together across cultural or geographic divides when it comes to our gear.” He emphasizes that Formula Werks does not create its clothes in a vacuum, that their “ideas are sparked by our surroundings” and that part of their mission is sharing their own ideas with their community when they think of something “that needs to be presented to the world.” Though Escape 76 admits that Formula Werks expresses “probably too much anger at governments, institutions, and the good ol’ USA,” he says that—in a certain sense—Formula Werks does embody the “spirit of our nation” and the spirit of Chicago. He says that his company and his shirts communicate a certain kind of “independent spirit,” rebelliousness and ambivalence which is very Chicagoan and very American. “A love/hate dynamic is what moves this city and makes it great,” he says. (Ilana Kowarski)

[…] – I’m super wordy – with Ilana from the publication. You can check out her great article right here, which popped online on New City and Boutiqueville. I’m told this is going to print as well, […]