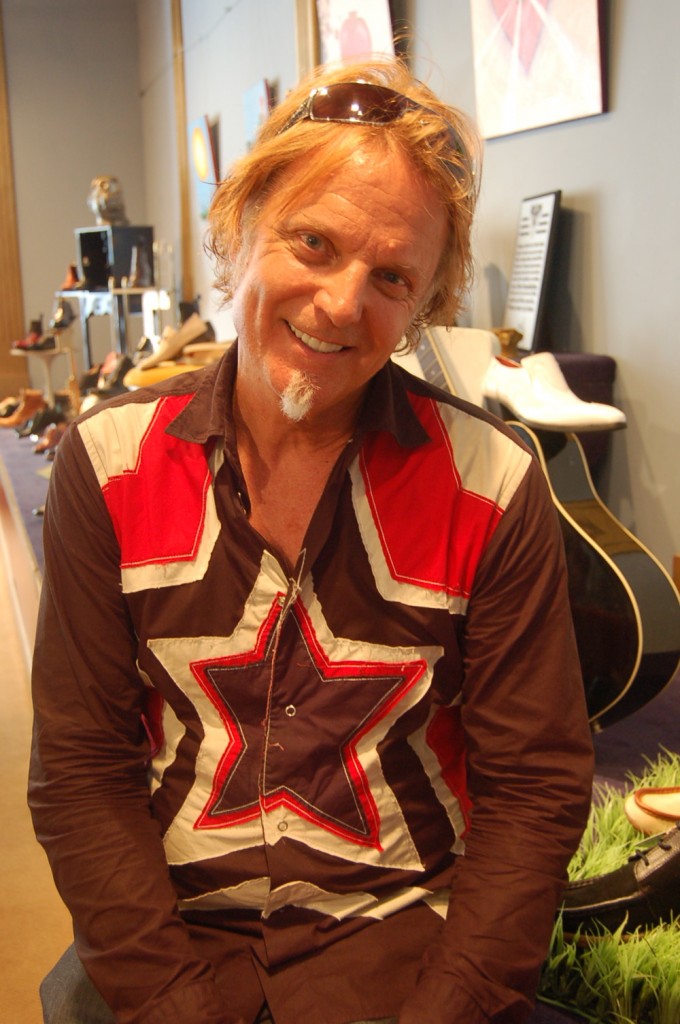 John Fluevog has angels on the soles of his shoes.

Urban Angels, that’s the name of this particular mid-calf boot, which like the Fluevog stores, hit their twentieth anniversary this year. In addition to the angels stenciled on the soles, there’s a personal message from Fluevog inscribed: “Resist all things, including Satan.” Soles are made from biodegradable Hevea tree latex soles. “Really comfy,” notes Fluevog.

Judging from his rock-star appearance—dark blue denim, a red, white and blue button-shirt with a pattern of stars at the center, tousled strawberry-blond hair, Prada sunglasses on top of head, and a thin line of white goatee on his chin—you wouldn’t think that Fluevog, designer and creator of cult-status funky shoes since the mid-eighties, is the kind of guy to stamp spiritual phrases and angels on his products.

Underneath the shiny layer of slick Euro fashion and laidback Vancouver breeziness is a man devoted to both his art (creating one-of-a-kind shoes that resonate style for years and with the kind of quality you’re more likely to find in Italy, not here) as well as his own version of spirituality (divine inspiration and acceptance).

“Basically, I’m really into Jesus, but I’m not into calling myself a Christian,” he says.

This is Fluevog in a nutshell: offbeat, totally serious and irreverent at the same time. “I actually believe Jesus was a huge rebel,” he says.

The occasion for Fluevog’s visit is the tenth anniversary of the Chicago store. In town for just for a day, Fluevog holds court up near the register with two of his employees, looking more like local patron than owner of the shop. An assortment of fans trickles in to meet the man behind the shoes.

There’s the skinny guy in skinny jeans who asks Fluevog about the black pointy shoes, the Style and Grace Marcello with tie-up laces, named after Marcello Mastroianni and made with soft Etruscan leathers. Fluevog shows the customer the sole of the shoe, which contain the words: “It’s only style and grace…but I like it.” And there’s the redheaded woman toting a Gucci leather bag and a female friend, who tells Fluevog, “You have this cult following….” And Fluevog responds warmly, putting an arm around each.

Fluevog began his career at the age of 21, appropriately, as a shoe salesman, at Vancouver’s conservative Sheppard’s. The artist and rebel inside felt constrained, but the rebel was exerting more power than the artist at that point, so he left the less-than-exciting shoe store shortly thereafter to run the more vibrant Fox and Fluevog with Peter Fox, his buddy from Sheppard’s. They ran the store together until 1981, when Fluevog experienced a life-transforming moment that pointed the way to his future, and led to his decision to leave Fox and Fluevog in pursuit of greener pastures.

One bleak November Vancouver day, Fluevog was sitting quietly in Fox and Fluevog contemplating things. A man walked in whom Fluevog had never seen before, and told the shop owner he had a vision of him going off and creating shoes with his name.

“He encouraged me,” Fluevog recalls.

He took this mysterious stranger’s advice without looking back. He started designing and sending his shoes to factories in the UK to be made, which is how his name spread around the world. Nowadays Fluevog shoes are made in Poland and Portugal, and Fluevog manages his ten independent stores (six in the US and four in Canada) entirely on his own.

“To do what I did on a small scale, all by myself, I guess God knew I needed a kick in the ass to be able to do it,” he quips.

Creativity comes from listening to his imagination and success from going with the flow. “I’ll get an idea when I take quiet time,” he says. “I’ll see things in a dream or I’ll be riding my bike and seeing something other than reality,” he says.

Being able to see into the future is helpful for a designer. Fluevog tells me he just finished the spring 2010 line and is working on looks for fall 2010. “For me, the future is more important than the present,” he says.

Not following trends is another Fluevog thing. “I don’t do what’s called magazine fashion,” he notes. Instead of imitating he focuses on creating looks that don’t fade with time.

Buy better and buy less is a theme in our culture now, Fluevog says. And the timeless element is something he continually strives for. He picks up a Danielson, the orange and blue round-toed men’s shoe that could travel back to the 1950s and not look entirely odd (a bit brightly colored, perhaps, but not shocking). “This will look just as great ten years from now,” he notes.

We finish our conversation discussing the future. About his plans to continue designing and running his stores, Fluevog is content. “I’m more than okay with things the way they are,” he says. “I’m just happy and thankful to be doing what I’m doing.”