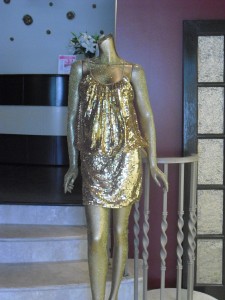 Painted in the window of Wells Street’s newest boutique, the unapologetic advertisement is definitely turning heads. “We wanted to see how [the neighborhood] would respond to our least aggressive window display,” owner Trevian Kutti says. Opening her namesake in March, Kutti has decided the time has come to introduce Old Town residents to luxury retail—Trevian style. “[We’ve been] taking our time… gauging the [area,]” she says. “As you can see, the sign in the window is like the warmup. It’s like touching water to see if it’s too hot. Right now it’s lukewarm.”

But not for long. Not if Kutti has anything to do with it. Known for her Oak Street staple G’Bani, Kutti is no novice to the world of retail—or the controversial “statement window.” “We do windows that show we are human beings before we are a business,” Kutti said in a New York Times piece that featured her button-pushing displays in January 2006.

Currently in the process of relocating G’Bani to Old Town, Kutti and husband B.J. have already begun implementing their plans to dominate the block with their latest venture. “We wanted to make Trevian completely upscale, so now we do Moschino, Richard Tyler [and] Chloe…to bring a destination luxury boutique to Wells Street,” she says. While Kutti is not the first to take a crack at Old Town couture, she isn’t daunted by the failures others seem to have experienced in the area as of late. (Stores like Gray, One Yellow Shoe, Trend For Men and Uri Boutique have all closed in the past year alone.) “We wanted to jump while everyone was still scared…while there was blood in the streets, basically,” she says. “That way, we could dig our heels in and have a solid foundation by the time things turn around. And if they don’t turn around? It’s probably going to be up to us to turn them around.”

Her confidence is not unwarranted—since opening G’Bani in 1997, Kutti has definitely had a hand in influencing Chicago fashion. “We actually became the first all-high-heel concept shoe store in the city of Chicago,” she says. “We were the educators of stilettos in this city.” With plans to move the heel haven right down the street from Trevian in an effort to “monopolize the street,” Kutti says G’Bani fans need not fret about its temporary absence from the scene. March 2010 will see the three-level store return to its conceptual roots all the while expanding its range—new G’Bani will feature not only heels and apparel, but housewares and furniture to boot.

And in the meantime, there’s G’Bani’s new couture sister. With Trevian taking over the space formerly known as Josephine’s, Kutti has already completely revamped the entire décor, putting even well-known high-end competitors to shame. “I think our taste level is a bit more sophisticated,” she says. Emulating an actual home, the store is certainly unique, with its courtyard swing, zen resting area and Taj Mahal-esque closet space. The couple’s international roots are also apparent—a fact Kutti takes tremendous pride in. “We know the world,” she says. “We’re not domestic by any means.”

Having just returned from Dubai (a strong candidate city for a future Trevian/G’Bani locale), Kutti isn’t kidding—between her and Nigerian-born husband B.J., the pair is constantly jet-setting. “[I’m] out of the country every two weeks, needing inspiration from the rest of the world and infusing that into the concept,” she says. Case in point? Kutti pulls from the rack her favorite Parisian-inspired Chloe jacket. 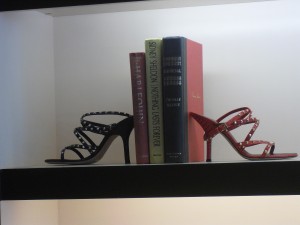 “The average person cannot wear this coat,” she says, holding up a magnificent silk silver piece with a large, defining collar. All hand-chosen by either Trevian or B.J., most of the store’s pieces follow suit: timeless and simple, with one bold, centralized detail. “Things that you can wear season after season that’s not a lot of logo,” Kutti explains. She promptly pulls out another example—a long white Marc Jacobs dress with toggled buttons and detachable sleeves-turned-gloves. “Everything we choose I’ll wear,” she explains. “If I can’t wear it, we can’t sell it.”

It is perhaps this attitude that has gotten her noticed in the world of fashion—Kutti has gone from local entrepreneur to style adviser to the stars in her ten-plus years in the biz. Celebrities like Kelly Rowland and Regina King are quick to call when events like the MTV Movie Awards are on the horizon, trusting Kutti’s expert eye and exquisite wares. Bravo also seems to have noticed—Kutti is rumored to be up for a spot on the network’s popular “Real Housewives” series. “We’ll see how it turns out as far as the legal aspects…” she says coyly. “If that goes correct…perhaps.”

Until then, Kutti will remain hard at work, raising the city’s fashion standards to an international level. “We don’t wait to get a clue from something domestic,” she says. “We try to bring the world to Chicago.”