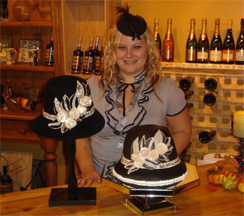 Formé Millinery owner Jenny Gerst sometimes feels as if she is lost in time. “I definitely believe that I’m reincarnated from a different generation, ” explains Gerst, who has been obsessed with the twenties and forties from the time she was a child in Kokomo, Indiana, collecting vintage clothing and films. A small-town girl with a love for high fashion, Gerst decided she wanted to be a designer from an early age, convinced that clothes from earlier eras captured the feeling she thought was missing in modern clothing. And now her vintage hat designs are getting noticed. Even local bakery La Petite Sweet made a cake in the shape of one of her millinery creations.

Growing up, Gerst’s mother used to make clothes for her and Gerst was impressed with her mother’s style and attention to detail. “Who would have known that those moments with my mom were shaping my mind to do what I do today as a milliner,” she marvels. By the time Gerst was in middle school, she was spending her entire allowance on vintage clothing and taking sewing classes from local seamstresses. During her high-school years in Colorado, Gerst began studying with British costume designer Lindsay Ray, who inspired her by showing her that having a career in design was possible. “She got my mind working on what I could do as an artist,” Gerst notes, revealing that she might not have applied to art school without Ray’s influence. At the Art Institute of Colorado, Gerst proved herself as a promising designer, and was awarded “Most Creative Upcoming Designer” when she graduated. Since then, she has costume-designed for the likes of Cirque du Soleil and Hubbard Street Dance Chicago, and has created the Grammy Awards dress for comedian Margaret Cho.

Though formally trained in costume and dress design, Gerst decided she wanted to make the vintage hats she had always worn and loved, so she took classes at TLD Design Center and Gallery. After a few years of millinery lessons, Gerst established her own hat-making business in 2007, when she created Formé. For Gerst, having her own fashion line is a dream come true. “I have always wanted to be own boss from day one. Most artists don’t want to design for someone else. They want to design their own work,” she says. 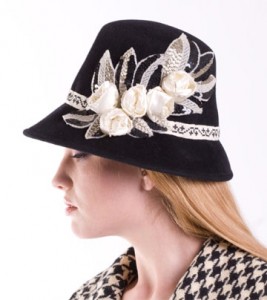 Now that she has established Formé Millinery, Gerst sells and designs her own hand-crafted vintage hats, and she believes that—in doing so—she preserves a part of the past that might otherwise fade away. Because millinery work is “a dying industry,” Gerst thinks that her work helps to keep “the hats and the craft alive” by bringing back the high quality of handmade hats to the present. “I really appreciate the craftsmanship that’s involved in true couture hats, and I’m trying to carry on that legacy,” she says.

Gerst hopes to create the kind of “one-of-a-kind pieces” that mark earlier eras of hat-making, so she does nearly all the work on her hats by hand, and places an emphasis on designing hats that use old-fashioned materials as much as possible. “It’s almost as if the material tells me what it wants to do,” she says.

As a vegetarian and lifelong animal-rights activist, Gerst pays particular attention to the materials she uses in part because she wants to make the hats look authentic without using leather or fur. “I don’t see a purpose to draping our bodies in fur or leather,” she says. “It looks prettier on an animal. There are no excuses, especially in this day and age, when the information is out there and we know what these animals have to go through just to give you their fur.”

Gerst views designing couture hats without animal products as a challenge, and says she is inspired by innovative designers like Vivienne Westwood who show her that “there’s always the next step that you can take a work.” With hats that run the gamut from formal and elaborate to casual and ready-to-wear, Gerst promises to provide her customers with accessories that suit a variety of people and occasions. “I think a hat is a personality in itself,” she says. “There’s a hat for every mood. It is a conversation piece. It usually brings attention to you, but I think in a good way.”