by Brian Hieggelke
October 9, 2009Filed under: 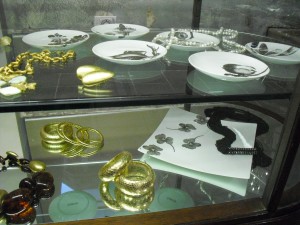 Terri Vizzone believes in retail therapy—you know, that calming, healing effect that being in a store with fabulous things has on a woman’s psyche when she’s just broken up with her boyfriend? Or lost a pet? Or even just woke up on the wrong side of the bed?

Taking the theory to heart, Vizzone has made over and relocated her store, Only She, into a shopper’s paradise—a safe haven, if you will, for all things fabulous. Newly named the Urban Style Emporium, Vizzone returns to her original block with a new look and a new vibe.

Having relocated once before, Vizzone decided the third time was a charm. “I figured, if I’m gonna’ move the store again, I want to come right out of the box doing something different. The whole world is changing, everything is shifting, so you need to shake it up a bit!” she says.

Adding new lines of art, gifts and shoes to her eclectic mix of designer clothing (she favors what she calls “architecturally interesting designers”—garments with highly unique textures and shapes), Vizzone has done just that. A former buyer for both Macy’s and Bullock’s, Vizzone has been immersed in retail for as long as she can remember, but up until now, she has remained focused on fashion.

“I love my clothing—that’s all my trading, and all my experience—I don’t want to give that up,” she says. “[But] my thought was to make it a true emporium: we really just want to focus on artisans of all venues. We’re starting to carry wall art, ceramics, dishes. We’re gonna let it wander to wherever that takes us.”

Especially if those artisans are local. “The focus for me is really artists who might be stumbling right now because there’s a lot of galleries closing, a lot of stores closing,” she says. “The idea is to really look in our own backyard—we want to give the Chicago people their due and find a home for them.”  (Nicole Briese)