by Brian Hieggelke
October 27, 2009Filed under: 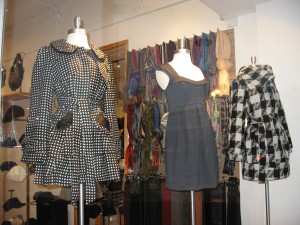 For stylish low-priced clothing, Chicago women might shop at H&M or Forever 21 downtown. But discriminating value shoppers have a new option: DLR Clothing & Accessories in Lincoln Square. Owner Sandy Veder stocks his boutique with fashionable merchandise that he buys wholesale. “Inventory is held at the actual manufacturer, which is different from most retailers,” he says. With no distributor or large stockroom, the markup is low.

DLR’s reasonably priced brands include Pink Martini, Ark & Co, and Alythea. “We sell Lush—you’ll find it at Nordstrom’s, but ours is thirty percent cheaper,” Veder says. “We have Renee C. at thirty percent cheaper than Saks, and we get it three weeks before they do. Shop anywhere around and you’ll see that a jacket/coat costs $250, but we have it for $129.95.”

Another advantage is the limited quantity offered of each distinctive fashion. “I look at 600 to 700 different styles every three weeks,” Veder says. He purchases a limited number of pieces in each design for his DLR (short for “Dealer”) stores. “H&M might have 600 of each item, but we order a maximum of six per cut per color.”

On a recent visit, DLR had eighteen rayon-blend mini-skirts by Lush for sale: six in purple, six in grey and six in orange. The shop carried twelve checkered flair coats: six in white/black and six in pink/black. A ruffled cocktail dress came in maroon only, meaning just six Chicago women had a crack at buying it. A word to the wise: if you see a piece you like, buy it right away.

Although fashions typically sell out within days, Veder, 43, and his sibling Tony, 40, (who he calls his “kid brother”), quickly replace these styles with other fresh looks. They honed this skill while successfully running six boutiques in their native Ontario, Canada (three DLR stores in college towns and three Skirt stores in resort towns). The Chicago boutique is their first U.S. venture. They plan to open two more U.S. shops in 2010.

Regarding the merchandise, Veder proudly states that eighty-five percent of his product is U.S. made. “It’s a strong selling point,” he says. A surprise selling point is the recyclable shopping bag: a classy black tote emblazoned with turquoise handprints and chartreuse branches. “It’s a nice little add-on,” Veder says. “Someone’s not jamming a little plastic bag in your hands.” (Sarah Klose)

Donate to Newcity today and your contribution will be tripled!
+