by Brian Hieggelke
November 10, 2009Filed under: 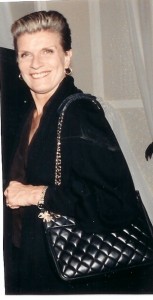 It’s a bittersweet year for Saks Fifth Avenue. 2009 marked a momentous occasion for the company—eighty years as one of the premier department stores in the city of Chicago. But 2009 also brings the departure of one of the company’s key resources, when special events manager and fashion director Nena Ivon retires.

This Friday will see the end of an era. A 53-year-long era during which Ivon reigned supreme as the go-to fashion maven on high at Saks Fifth Avenue.

“Everyone thinks I’m gonna be hysterical,” Ivon says. “I’m perfectly fine. I’m actually kind of excited.” Dismissing an old quote in which she said that she’d do her job until it wasn’t interesting anymore, Ivon says she’s leaving to expand her other interests—and to rest. “I wanna write the book, I want to research for school… I’ve always done charity work, I’ll be able to do more of that now,” she muses. A retirement will also mean more time for friends and family. “I’ve never had the holidays off!” she says. [“I’ve] had to put people on my schedule to be with them. It isn’t that it’s no longer interesting, ’cause it is..it’s been a really exciting time, it really has, but I think one gets to the point where one goes, okay, what else do I want to do?”

Her quest to expand her personal horizons leaves behind some very large pumps to fill. Working her way up from a sales associate at 16 years old, Ivon has done it all. “I’ve worked with so many of the [designers] that everyone would know, and a lot that no one remembers anymore,” she says.

One of Ivon’s personal favorites, she recalls the first ready-to-wear collection of Christian Lacroix in 1989. “He did not want to use live models,” she says with a smile. “He wanted to use all mannequins on top of live sod. It was actually hysterically funny, because the audience was expecting a fashion show, and we opened the curtains, and there it was…a ‘ta da!’ and then a ‘huh?'”

Remembering former Saks Fifth Avenue president Adam Gimbel and his wife, designer Sophie Gimbel, Ivon says Sophie’s ready-to-wear and couture collections exclusively for Saks were also among her favorites. “With the Salon Moderné collection, it was as exciting as doing a couture show. The clothes were breathtaking. And that of course was ours alone—very, very exciting.”

Not that Ivon needed to love the merchandise she sold. There were plenty of times she didn’t. “I’ve always felt you don’t have to like the merchandise you sell…I’m not here to like or dislike a designer. I’m here to show their merchandise in a fashionable manner and do it the best way I can.”

Saks clearly felt she did just that, asking her to continue to do the store’s major events, like their fiftieth anniversary thirty years ago, when Ivon and company managed to sell every piece of merchandise on every single floor. “The store’s been good to me, and I’ve been good to the store,” she says. “Saks Fifth Avenue is definitely my work, it’s definitely my career, it’s definitely been my profession and it’s definitely been my family, but I do have a life beyond that. I think one is very uniteresting if one only has a career. You have to be much more multi-dimensional than that. It’s also been said that I’m a workaholic,” she says. “I’m not a workaholic. I think a workaholic lives, drinks, breathes, eats, sleeps work. I don’t do that, I never did. I certainly work long hours many days in a row to get it done. It is what it is, but I also have an outside life. You have to take time for you.”

Ivon’s hard work certainly hasn’t gone unnoticed. “It’s just literally been overwhelming,” she shares. “People I haven’t heard from in years or don’t even know are emailing or writing me notes. Most people don’t get this until they die. It’s absolutely extraordinary to be able to have this kind of validation. [It’s] so heartwarming, and it really makes me think it’s all been worthwhile.”