by Brian Hieggelke
November 17, 2009Filed under:

Two still fresh-on-the-scene streetwear boutiques in the South Loop prove that the Windy City is not just a place for trends to proliferate; it’s where they’re made. Lifestyle store Jugrnaut stocks everything from clothes and accessories to art, hats and action figures, while self-described “sneaker geek and stylist” SuccezZ focuses on providing rare and limited-edition footwear to the shoe-obsessed. Both stores are big supporters of local talent, whether it’s through music, art, style or design. 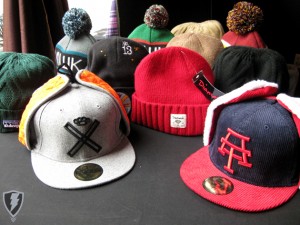 “There are people who are fashion forward in Chicago that are ahead of the curve, like in Japan, but not that many. It’s a slow process, but we’re getting there,” says Roger Rodriguez, one of the South Loop streetwear shop Jugrnaut’s owners.

The team of four men—Rodriguez, Brian Navado, Manny Rodriguez and Arthur Banks—opened the store in October of 2007 after a previous venture fell through. The four own and operate the shop, as well as their own eponymous brand, which includes hats and shirts with the store’s lightning-bolt logo. The partners emphasize that the store is more than just a retailer of apparel. “You’re the brand, you’re buying into our lifestyle. Music, tastes, places, art we like,” Rodriguez says.

Some of the iconic hip-hop stars who have given streetwear labels recognition have come to Jugrnaut for events, including Kidz in The Hall, A Tribe Called Quest member Q-Tip, and Raekwon of the Wu-Tang Clan, as well as lots of local up-and-comers. Art is not only splashed across t-shirts, but displayed throughout the store. A print by the graffiti legend Solo and a smattering of action figures include the cultish $3,000 toy “Be@rbrick” by pop-culture icon Kaws.

T-shirts in a rainbow of bright colors like teal, rose, red, gold, orange and mint run around $25-$34 on average, with women’s t-shirts from brands like Hellz and Married to the Mob climbing up to the $40 range. Flannels are also a staple in the store, as well as a wide selection of luxurious hats, including fedoras from LRG and a leather baseball cap lined in satin.

Accessories complement the lifestyle aesthetic. InCase camera and laptop cases reflect the color choices of the clothing, while design-heavy backpacks by NYC-based label Mishka make a statement more deliberate than “something to throw your books in.”

The streetwear scene is very community driven, so it makes sense that those who like to wear the clothes would also take a part in designing them. “I like that we’re part of our [this] scene, not outsiders who are coming in trying to profit off it,” says Rodriguez. 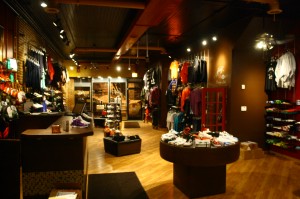 The lifestyle and streetwear boutique SuccezZ is rapidly empowering sneaker-obsessed Chicagoans with access to even more exclusive kicks. Set up in 2008 by Chicago native and New Jersey Nets forward Bobby Simmons and entrepreneur Lavelle “V Dot” Sykes, SuccezZ is helping the burgeoning Chicago streetwear scene grow, with an emphasis on the most rare and buzz-worthy shoes.

Within the realm of Nike favorability, SuccezZ has earned the highest honor—the highly coveted Nike Tier 0 account, which grants the chosen retailer access to the most exclusive shoes.

The store carries clothes for men, women and children. Top brands include Christian Audigier, Laguna Beach, Snkr Fiend, Local Celebrity, Dirty Hollywood and Levi’s. Though SuccezZ has an array of clothing (mostly men’s) including jackets, button-downs, graphic tees, denim and khakis and hats, shoes are the primary driver. “Sneakers are our main focus; clothing is an accessory,” Sykes says.

Sixteen-foot-high ceilings leave the space feeling very open and free, yet the warm colors ground the boutique, helping establish the partners’ desire for the store’s environment to feel like someone’s house. A gigantic flat-screen TV, flanked by two comfy armchairs, definitely helps, which usually plays a movie or is hooked up to PS3 or Wii for customers’ enjoyment.

A glass-plated side door opens to a small room labeled “design lab,” where the SuccezZ team can be seen drafting up the latest designs for their own brand, “Chi Boyz,” a Chicago-centric collaboration with Nike. A pair of sneakers are embroidered with the blue and white Chicago flag, while the soles match up to create a silhouette of the Sears, ahem, Willis, Tower. The t-shirts embody both deeply rooted Chicago history and pop culture, and do so with a sense of humor. One even has Mrs O’Leary and her infamous cow rocking headphones and a boombox.

The owners prefer working with local talent and brands because they are a beacon of exclusivity—the cornerstone of sneakerhead culture. And why such an obsession with footwear?

“Because of the attention you get when you’re wearing something different,” Sykes says. “When people look at you, they go down, then go up.”