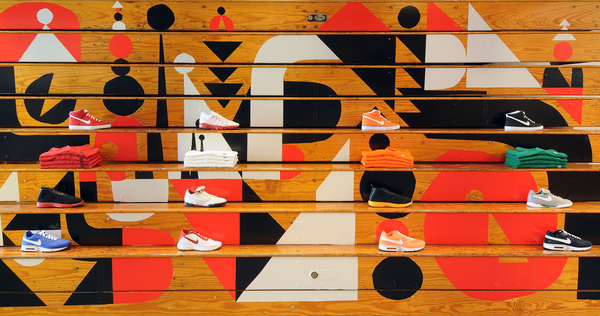 It’s Friday night and the sounds flowing off the DJ’s decks easily drown out the traffic outside the doors on Milwaukee Avenue. But the noise doesn’t seem to faze the boisterous crowd of sneaker heads, hipsters, bloggers and beauty queens gathered within, checking out the new wares and, of course, each other. Just like another shoe-release shindig for the St. Alfred’s regulars, perhaps, but we’re a long way from Niketown,  tiger. This is Nike+St. Alfred’s coming-out party.

The global shoe giant and the Chicago sneaker mecca have teamed up in a promising retail collaboration that’s taken over the Hejfina space next door to Saint Alfred’s storefront on Milwaukee Avenue, starting this Thursday, and lasting through this summer’s World Cup, at the least. The pop-up shop offers selective Nike sportswear, most notably its licensed soccer gear from competing countries, Saint Alfred x Nike Co-Lab pieces and exclusive artist collaborations.

In the latter case, they’ve teamed up with artist Cody Hudson for the month of April. Not only do his designs decorate the space, but he’s created six limited-edition tees that are custom screenprinted on site. In May, Hudson will step aside for Mr. Cartoon, the LA-based graffiti artist. Though Hudson’s efforts are unique to Chicago, Mr. Cartoon is actually one of six artists commissioned by Nike to create special sportswear collaborations tied into the Cup. Mr. C’s USA work is still not ready for public viewing in the “True Colors” collaboration, but Nunca’s Brasil line and James Jarvis’ England are already showcasing a mix of playful nationalism or perhaps nationalistic play. Rounding out the six are Delta (Netherlands), Kronk (South Africa) and So Me (France). 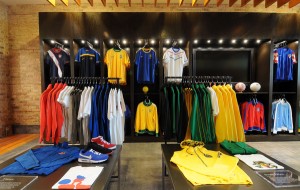 Though the DJ won’t be a regular store fixture, the screenprinting station in the back should keep things lively. And the bleachers, folded up along the wall as a backdrop for Hudson’s art right now, will turn functional from time to time, as special events and viewing parties fill the space.

At the preview party, Saint Alfred’s manager Krabby Rangoon told me that this was Nike’s first pop-up store anywhere. Rangoon’s a low-key guy, but even he seems excited by the prospects. Understandably so. (Brian Hieggelke)