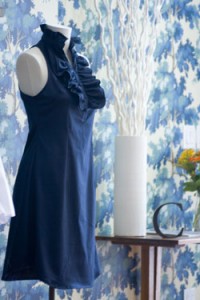 It’s a week after opening, and Cerato owner Tracey Glibowski is reordering Kristin Hassan’s drapey asymmetrical “Flow” tanks; a lone Jlee Silver maxidress—equal parts Hamptons and Mt. Olympus—hangs in the corner, the last in-stock representative of its kind. In other words, it’s been a pretty good first week at the new Southport women’s clothing boutique, which is dedicated to showcasing primarily local designers.

The store is clearly a labor of love for Glibowski, a former advertising exec whose recent layoff inspired her to turn her passion for fashion into a career. Surveying the store, a spartan-but-not-sterile space with exposed brick and country-chic blue wallpaper, she seems a little bit amazed at how well things have turned out. After all, Glibowski started with a concept but no insider knowledge of the Chicago fashion scene—she says she discovered many of the designers she features by trolling the internet. So far, though, she seems thrilled with the results.

“It’s a partnership,” she says of her designers. “I hope they’re in it for the long haul.” Which doesn’t mean she’s stopped combing the city for new talent—in time, she’s definitely looking to add new names to her roster, which currently includes Kate Boggiano, Eskell, Anna Fong, frei designs, jules, Avery Layne, Horacio Nieto, and Shorty Clothing, along with Hassan, Silver and a handful of out-of-town imports.

The merchandise is across-the-board wearable, feminine without being frilly, high fashion, perhaps, but not avant-garde. It wouldn’t hurt to have the confidence (or figure) of a supermodel, but it’s hardly a prerequisite here—while the clothes might be described as “flirty,” “elegant,” “quirky” and “fun,” there’s nothing currently in stock you’d characterize as “daring.” Nor is there anything outrageously expensive. Most items go for between $100 and $200, and nothing’s above $350.

Glibowski stresses that while the store definitely has a carefully curated aesthetic, different designer voices mean real variety. It’s true: part of what’s so much fun about Cerato is the crash course in Chicago fashion. An hour perusing the racks, and you won’t be confusing a Kate Boggiano with an Anna Fong any time soon. (Rachel Sugar)

So excited about this! And you can now add my collection to the list: Brynn Capella (handbags and accessories!) Yay!