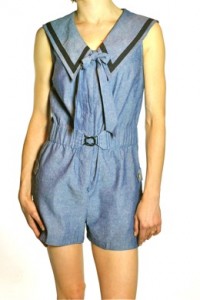 “Rompers are for hipsters and babies and the babies of hipsters, ” claims my friend Jenn, a marketer for Whole Foods whose husband is the front man of a Pitchfork-adored band. “I have no problem with them, but rompers simply aren’t appropriate for anyone over the age of eight,” fumes my most fashionable and liberal friend Risa, who favors menswear and a sweater knitted with a handgun pattern. It’s a sentiment shared by both fashion insiders and outsiders. The romper, a summery one-piece women’s garment combining a short-sleeved or sleeveless top with shorts, has gotten a lot of ridicule since it emerged as a trend in Brooklyn around 2006 or 2007 (depending on who you talk to) and fully mainstreamed across the country last summer. Major fashion critics have called rompers regressive, tacky, ridiculous.

But as arbiters of fashion on the ground keep wearing them, the fashion world has finally given up, given in, and bought in. Vogue recently reported on the Coachella 2010 look, highlighting the importance of the romper by including photos taken by blogger Hanneli of indie actresses and fashionistas wearing belted flowered rompers (along with exposed lingerie and camel-colored woven sandals, the other two big bicoastal summer trends). In 2009, after editors starting showing up to the magazine’s office in jumpsuits, Vogue overcame its skepticism that women would actually wear them. Senior Market Editor Meredith Melling Burke admits, “When I first saw them at the shows, I thought, ‘Oh, are we going there?’… but now I’m eating my words.” And designers, beginning with Gaultier and now Marc Jacobs and others (including it-boy Jason Wu in spring 2010), are catching on by including romper looks in their collections. Even more importantly, progressive, more mainstream women are starting to realize how functional and flattering the romper can be, even if to the mockery of their friends.

Who cares what we’re wearing this summer? Rompers are, in fact, part of the long history of political resistance against the repression inherent in women’s fashion, from the corset to the current sundress, the standard summer apparel that’s long been overdue for a coup. What interests me most is not the fact that the romper has been consistently criticized, but that it’s been criticized on the same terms that have emerged every time women gain political progress through fashion. Every single time women are given an option of a new divided garment to wear in lieu of dresses and skirts that literally keep us from keeping up with the boys, there’s a backlash by the fashion world that, in this case, directly obstructs the kind of third-wave feminism that asks us to overcome the biases against wearing clothing that’s not of “women’s sex” (as women’s pants have historically been called). The exact same arguments that are being made about rompers now were once made about knickers, bloomers and, in fact, every single kind of divided women’s clothing that has appeared through history. The original bloomers were designed to preserve Victorian decorum while allowing women to do active things, to romp. Why does this still seem to rub us the wrong way?

The first and, I believe, only real problem with the romper is its name. We know the romper as a young child’s article of clothing—or, if worn as an adult, something we’d only don for sports or perhaps as overalls for painting. Rompers emerged during the Victorian era for children as the first casual clothing actually designed for kids (at precisely the same time that Amelia Bloomer’s pants for women were being roundly rejected by the fashion world—just as knickers for bicycling would be deemed unladylike a generation later). A romper is, linguistically, only one degree of association away from an infant’s onesie—and I’ve seen some rompers marketed as onesies, as well as jumpers and one-pieces, but this isn’t an argument about terminology. This is an argument about our rights.

A romper might also be defined as someone who romps, someone who plays energetically and perhaps somewhat roughly. Someone who enjoys light-heartedness, a good comedic romp from time to time. Someone who frolics, capers or cavorts. And yes, there are sexual connotations with romping, but it’s summer, and the whole point of summer clothing is to wear as little as possible. The romper is no more provocative than the sundress, which has been long overrated, or those seersucker shorts men don’t seem to realize are completely sheer.

In fact, it’s less provocative. Unlike the sundress and the skirt, the romper allows women to do daring things like ride a bicycle and lounge on the beach or in the park without flashing her underclothes. Pre-romper, I spent the summer of 2007 riding my bike through Chicago wearing sundresses and almost always with a camera in hand, taking pictures of men who shouted obscenities at me when my dress caught a breeze and they mistook my bike shorts for underwear—my idea was to take pictures of them, then have a fabulous gallery show with the photos captioned with the men’s quotes; but then I learned that Laurie Anderson already did this in 1973. Now that I wear a romper for summer bike rides, these derivative projects are a thing of the past. 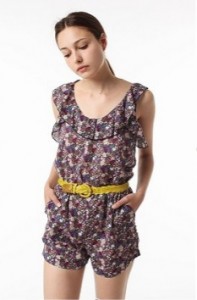 In all seriousness, Chicago summers are hot. Dresses and skirts fly up in the summer. In addition to riding a bike, you worry about the breeze, about how to sit on the grass or the sand. You don’t exactly lay out for a Frisbee when you’re at the park and wearing a sundress. Shorts are functional, of course, but dressy shorts are very hard to pull off, and frankly, most women don’t like how they look in shorts, let alone would we consider wearing them on a dinner date. Bike shorts worn under skirts and dresses are sweaty and ride up. And nobody wants to wear layers in the summer.

Maybe more than anything else, in the fashion world, where more and more we seem to be fetishizing fashion history that was irritating at the time, from 1950s prissiness to the undying fascination with flappers, and now this “Mad Men” nonsense, the romper is fresh. It’s a new silhouette, a new outlook, a practical, streamlined approach to fashion that’s forward-looking rather than regressive. It’s a summer sundress 2.0, all the attractive qualities (free legs, pretty silhouette) and none of the drawbacks: you can actually play this summer without resorting to Laurie Anderson-inspired projects to deal with traumatic fallout. You can climb a tree. You can show off your cartwheels. You can sit at picnics and Pitchfork with your legs splayed out comfortably, which is frankly a pretty big achievement for women’s rights in the day-to-day life of summer.

Rompers are available at every level of dressiness, from terrycloth to silk (I own both) and can be dressed up for the theater or worn over bathing suits as an easy cover-up. And they’re available at every price point. They’re practical, they’re immensely comfortable and, once you get over the fact that you wore them as a little kid, they’re fairly adorable.

Some final tips for wearing the garment of the future: 1) get one that’s appropriate for your body type. There are a vast variety of rompers out there for every body type—if you don’t normally wear tube tops, don’t buy a romper without straps. Wear one that’s long enough, that gives you enough coverage. One that’s comfortable, because that’s what rompers are all about. 2) keep your hair and makeup pretty natural, and legs bare. 3) Don’t overdo the accessories. Espadrilles and tooled sandals, and if your romper is short keep your shoes flat. Carry a simple bag. Or—are you sitting down?—you can even skip the bag, because most rompers have pockets.