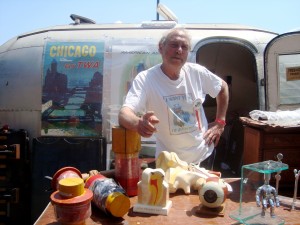 “I am a happening!” Michael Hodesh proclaims as he surveys the antique-laden tables in front of his circa-1964 Airstream trailer. On the inside of the door, a sign reads “Dogs and Cats Prohibited” even though he has a regal pup parading around his goods; the outside sign reads “Bar’s Open Late,” but he doesn’t drink. Michael is definitely a character, and seemingly a man of quirky contradictions.

At present he is at the west end of the Randolph Street Market Festival, an antique fair and indie fashion market that graces Chicago one weekend per month in the summer. Hodesh has made the haul from his base in Cincinnati to this fair for years. While driving a truck with an attached trailer full of stuff roughly 300 miles might seem burdensome to some, for Hodesh it’s just part of the job. After being in the “history-selling business” for more than thirty-five years, his passport is just as weathered as the treasures on his table. Aluminum pigs from Mexico, a wooden stool from China, wooden pipe molds from Philadelphia, fashion posters from Paris and some classic Americana advertisements. He travels all over the world for these gems, and he plays no favorites. He is merely a temporary keeper, he says, selling the “story passing” rather than a mere tangible object. He collects these artifacts because he hopes it will be meaningful to the new “foster parent of history” or anyone else who listens to his exuberant tales.

It’s not difficult to discern the passion and experience Hodesh has for his métier. Out of all of the odd belongings you’ll find him engaging with, there won’t be a chair. He never sits down, always surveying the scene and darting over to a prospective customer to preach an object’s story before anyone has the chance to ask “how much?” While some might find his prices astronomical, and the absence of customer transactions this particular hour supports this notion, his fervent approach to hawking shows that these objects are not hunks of metal and various junk but rather handiworks that are all special in their unique way. For him, he collects the old and unusual because hopefully it will be “meaningful” to the purchaser; he finds his craft “extremely spiritual.” And no, the persona on his shirt is not Uncle Sam, it’s Hodesh’s face implanted onto the ubiquitous image. (Rhianna Jones)