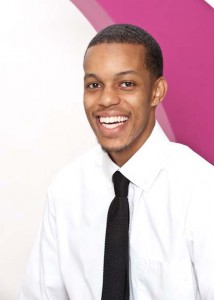 It may be summer in the Windy City, but in the world of design, it’s a different season entirely. Just ask Donaldo Smith. “Spring 2011!” he declares triumphantly. “[That’s when I’ll make] my first introduction to the public.”

As the only male designer in residence at the Macy’s on State Street Chicago Fashion Incubator, Smith has been hard at work on his conceptual menswear brand, Killian Gui.

“Come spring, I have high expectations,” he says. “That’s when it will be in stores.”

For Smith, it’s been a long time coming. “I’ve been fascinated with clothing ever since I knew I was going to be able to wear a new piece… to the first day of school,” he says.

Signing up for “any subscription to menswear fashion that [he] could,” the young fashion naif set out on a self-taught path of design. “I was a sales assistant to the Midwest buyer [of] an urban clothing company,” he says. “I thought it was the best thing ever, because that’s how I dressed at the time.”

Smith’s style may have changed a bit since then—he now creates his own blend of “business wear with new takes on classic silhouettes”—but his passion for clothing remains everpresent. It was his interest in last year’s CFI designers and their lines that originally got him interested in the program. “I saw the great opportunity that they had,” he says. 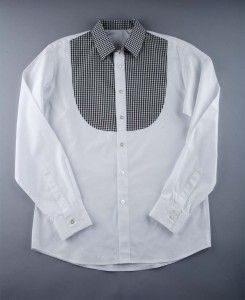 Intrigued, Smith began the application process. “We had to write an essay and give the pictures of our line,” he explains. “But we also had to have an in-person interview… with seven board members. I was definitely a little nervous when I walked into the room. It was like, this is my one big chance.”

Smith apparently wowed them—he beat out hundreds of applicants to become a member of CFI’s class of 2010. And he’s taking full advantage of the chance that he’s been given.

“The director, [Lara Miller] has helped me with numerous resources and directed me to speak with all the people that I need to help me get my actual line manufactured and produced,” he says. “I’ve been directed to boutiques, buyers, showrooms—so many people have been willing to help.”

Smith says he was surprised to find how big of a role the business world plays into design. “I did not know that most designers only spend about twenty percent of their time designing,” he says. “The other eighty percent is spent getting the business side in order.” Lucky for him, it’s a side he enjoys. “I’m a businessman at heart,” he says.

Smith says his experience has also given him a fresh outlook on the city. “I think the fashion scene in Chicago is on the up and up,” he says. Despite the demise of programs like Gen Art, he remains confident that the industry is a far cry from a dying breed. “There are still tons of opportunities for local talent to actually thrive in Chicago,” he says.

And to connect. “All the girls, they’re really fun,” he says of his classmates. “We’re one big family!” (Nicole Briese)