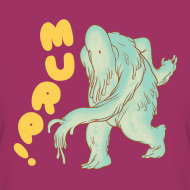 Paul Hornschemeier, the graphic novelist behind “Mother, Come Home,” “The Three Paradoxes,” and “Let Us Be Perfectly Clear,” has launched a line of t-shirts. Every week since late April, he’s posted a new design for sale at The Forlorn Funnies Shirt Shop, your online source for tees, hoodies and infant-sized onesies emblazoned with Hornschemeier’s characteristically quirky (his word: “strange”) graphics.

Hornschemeier has been designing graphic t-shirts since he was a teenager, but a stint contributing weekly cartoons to The Wall Street Journal inspired him to get the shirt shop going. “I realized that while I enjoyed working with the editor there and liked having something popping into the world each week, I’d rather have that something be entirely of my own creation,” he says.

His straightforward design philosophy—“honestly, I just come up with something I think is graphically interesting… and that’s the week’s design”—and penchant for narrative have produced a line of shirts that feature what he describes as more “single panel comic” than “stand-alone graphic.” In typical Hornschemeier fashion, the best sellers haven’t been his personal favorites. He’s particularly partial to “the one where a slimy monster is trucking along and the meaningless word ‘MURP!’ is next to him,” but “that shirt doesn’t sell.” In general, Hornschemeier says he’s partial to designs “that seem to be artifacts of some larger, lost pop culture.”

However attached he may be to his Murp! monster, though, you won’t catch him wearing the shirt any time soon. “I understand that some people see wearing their own shirts as some sort of savvy promotion, but for me personally… no way,” he says. “I’d feel like too much of a weird egomaniac. It’d be like getting a tattoo of my face on my forearm.” For the rest of us, though, the tee of the week sells for $15; past designs sell for $20 (some products are more expensive). “The next one will be about yachts,” Hornschemeier promises. “Or lions. Probably both.” (Rachel Sugar)