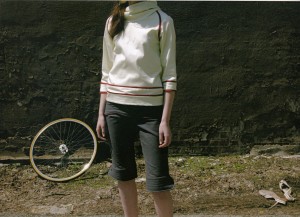 Leah Fagan is not what you might expect of a Chicago Fashion Incubator designer in residence. A German-born, small-town American transplant, her early years were not consumed with names like Chanel, Michael Kors or even Versace. She didn’t dream in fabrics and prints, and her outlook on clothing reflected more of the nature that surrounded her than any sort of runway couture. Growing up in the mountains of Garmisch-Partenkirchen, fashion was the furthest thing from Fagan’s mind. For her, dressing was about functionality. “I think a lot of my fashion sense and style was rooted in that mentality,” she says. Coming to America on her own at age 19 to pursue an education at Columbia College, the driven student planned to major in journalism and cultural studies. But Fagan made friends fast and quickly found herself more intrigued by the curriculums of her new acquaintances than of her own. “I had a lot of friends who happened to be in the fashion design program,” she says.

Fagan’s transition wasn’t a smooth one. “It was a pretty rough start,” she admits. “I just had no background.” Working overtime to gain the basic tools and knowledge her peers had been accumulating for years, she pushed herself—hard. “In one year I had to learn how to draw and how to be creative and how to sew,” she recalls. Finding her niche took longer still. “When I first started, I really didn’t have a sense of style,” Fagan says. “It took me a couple of years to develop it.”

With clothing line Peloton, Fagan seems to have done just that. And she’s managed to do it without compromising her roots. Bringing together her two alternate universes, she’s created a collaboration of “innovative and versatile clothing for the modern mobile woman.” Deriving its name from a biking term that describes a group of riders working together to finish a race, the line offers a marriage of comfort and vogue. “Clothes should allow you to go about your daily activities,” Fagan says. “And of course you want [them to be] good and stylish!”

Good, stylish and cost efficient. Like the rest of her CFI peers, the designer says she’s gained a lot of business sense during her time in the program. “I’m thinking about the bottom lines,” she says.

The bottom line for Peloton seems clear. With hopes to expand into a national brand someday, for now, Fagan is content to remain right where she is. “Chicago is a really great place with a community that is so supportive and growing. I definitely want to stay. I want to build a branch here.” (Nicole Briese)