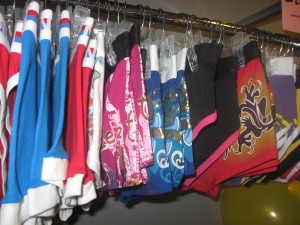 Owner Sylvester Jurczynski, who opened the shop in late June but only recently hosted the store’s “Grand Opening” sale, is unromantic about the store’s genesis. “I hated my job,” he says, “and I saw a niche in this neighborhood.” So far, he says, he’s been right: business is good. While he’s not making the hard-sell—or maybe I’m not the target demographic?—Jurczynski obviously knows his underwear.

With its metallic-flecked concrete floor and muted club music, Egoist is a kind of international gallery of flamboyant underthings. It’s more interesting than Macy’s and subtler than most of the shops lining Halsted. And with a number of lines otherwise unavailable in Chicago, the store does seem to have the men’s statement-underwear market cornered.

Gigo, a Colombian brand that specializes in exuberant prints, has been selling particularly well (one boxer-and-undershirt combo—perhaps best undertaken as separates—appears to be splattered with neon spray paint; a jock strap is equally understated in lavender leopard spots), he reports. Former “Project Runway” contestant Andrew Christian’s eponymous line is popular, too. “It’s all U.S. made,” Jurczynski says, and several designs are built to shape and, uh, enhance the wearer’s silhouette via “Butt-Lifting Technology” and “Anti-Muffin Top Elastic.” Other models offer, “well…you know,” Jurczynski says, gesturing at a pair of red boxer-briefs with strategic—and hard-to-miss—padding. 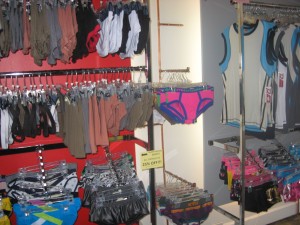 Egoist also carries Obviously, an Australian import made from wood-fiber (it breathes better and is more environmentally friendly than standard cotton), and their even-more-obvious fellow countrymen, Cocksox. There are also wares on offer from Frank Dandy, gia, Joe Snyder, Man Zone, N2N, PIPE and Pistol Pete, and Jurczynski notes that his is the sole American store stocking Spanish brands XTG and UDY.

Designer underwear doesn’t come cheap, but neither are we talking La Perla prices. A pair of Gigo low-cut briefs is $29.99, while Andrew Christian package-enhancing boxer-briefs (the “Shock Jock Extreme”) goes for $31.99. Most of the underwear hovers around $30, give or take a few bucks depending on the brand and the amount of fabric involved. Swimsuits, tees and tanks all run slightly higher—a nautical-inspired Pole People pair of (very short) trunks comes in at $46.99, a breezy N2N sleeveless hoodie is $39.99—but nothing I saw topped the $50 mark. A small price to pay, really, for that much excitement below the belt. (Rachel Sugar)