by Brian Hieggelke
April 5, 2011Filed under: 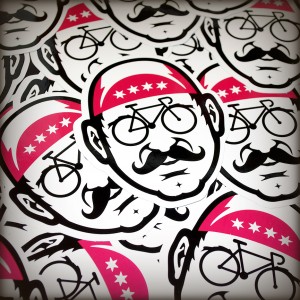 Mr. P.W. Farthing is the mustachioed face of ShyCog Co., an up-and-coming apparel company, and he wants you to ride your bike. As spring awakens, Chicago cyclists need a little motivation to tune up their wheels, dust off their helmet, and hit the streets. To these folks, Mr. Farthing has a message: “Live Fearless, Ride Serious.”

ShyCog Co. was “born out of inspiration of being a cyclist here in Chicago,” explains creator and designer Justin Siddons. A decade-long Chicagoan, much of Siddons’ adoration for the city stems from a passion for year-round urban cycling. Siddons says enthusiasm for the sport resulted in an “interest in the bike as a center image” of apparel design. ShyCog Co’s designs are “heavily influenced by the Industrial Age of Chicago,” Siddons says, taking inspiration from early 1900s cycling advertisements and historical photographs of the city.  Decals and cotton tee shirts can be purchased through the website ShyCogCo.com, with free shipping as a grand-opening special. Siddons plans to expand the apparel line with additions such as cycling caps and button up shirts. (Tiana Olewnick)