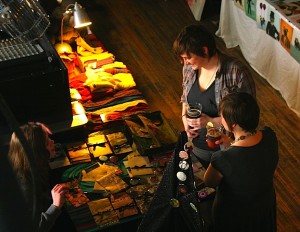 Rows and rows of artisans line the walls of a local rock club on a sun-drenched Saturday afternoon at the craft market series known as Urban Folk Circuit. It’s a labyrinth of creativity filled with rings made out of buttons, hand-painted china, jewelry made from beer bottles, knitted purses and scarves, photography, prints, soap, paper goods and much more.

Local artist Mary Lee Banie makes handmade classic purses out of vintage fabrics she finds at thrift stores. Banie says today is a slow day for her but she still manages to hand out a lot of business cards to people perusing the market. “Compared to the [craft markets] I’ve done in the past, this is a much younger crowd, which is good for me and I know a lot of the vendors here are saying the same thing,” Banie says.

Jess Duff and Kelli Wefenstette, old hands in the independent craft community, initiated this year-round craft market series. Duff says the idea for Urban Folk Circuit came about last summer when she and Wefenstette were doing summer shows. “Those summer shows are so long and it lasts all weekend. We wanted something shorter and easier that could go on throughout the year.” 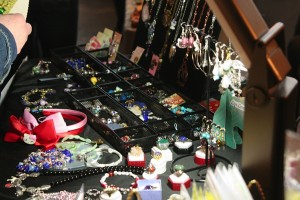 They launched Urban Folk Circuit in order to boost “fellow local artisans and neighborhood establishments in a way that is sustainable and beneficial to both,” Duff says. And since their first market last October, the number of crafters who participate has grown—this one, with more than fifty artists, is the largest so far. “We don’t plan to have every market that big,” Wefenstette says. “We like the mix of smaller markets versus the larger ones and doing so allows us to partner with a variety of different venues. It’s been a neat relationship developing between ourselves and business owners.” (Nancy Wolens)