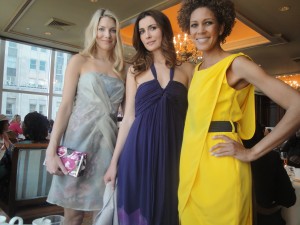 As an English girl on this side of the pond, two things came to mind amidst the hullabaloo over the wedding of Prince William and Catherine Middleton, now the Duke and Duchess of Cambridge: first, vicious jealousy because Kate stole my favorite prince and, second, how on earth was one to properly celebrate in America?

Over here, just a hop, skip and transatlantic flight from Buckingham Palace, local “wedding guests” gathered a few hours after the very early morning nuptials for an afternoon tea. The Four Seasons Hotel hosted “Crumpets and Couture: A Royal Wedding Fashion Tea” to celebrate the happy couple and give us an occasion to dress up, in our hats, just like the Brits. 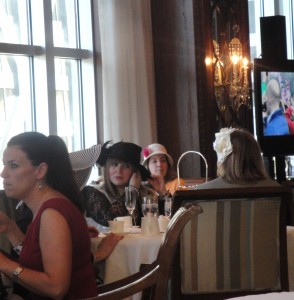 Three Ford models sauntered through the room dressed in British fashion designs by Karen Millen, L.K. Bennett and the Burberry Collection of Bloomingdale’s, pausing at each table for light conversation. A yellow Karen Millen shift dress drew almost as much attention as the bride’s white lace get-up. Well, not really.

When they left to descend the elevator back to American soil, the happy tea-saturated guests received cute British-inspired swag bags to take home. But they got so much more than that. Despite my craving for British accents, and the distance between Chicago and England, I choose to believe that “Crumpets and Couture” was a royal event. And for all you princeless girls out there, who like me watched the wedding with green eyes of pure envy, don’t worry. You can still marry Harry. (Lauren Kelly-Jones)