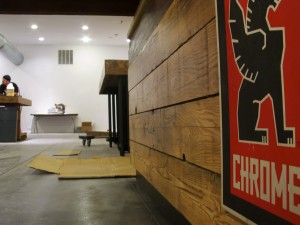 Paul Wilson, the store manager of the San Francisco store, says there’s no “cool guy” vibe at Chrome, which just opened its third location, in Chicago’s Wicker Park. Most of the staff and many of the customers have tattoos and piercings, but they are just as welcoming to a soccer mom as they are to an inked biker.

“Chicago is an urban city whose culture we identify with as a brand—tough and no-nonsense on the outside, but friendly and welcoming on the inside,” Meghan Litchfield, the head of retail at Chrome, says. “Also, we have a huge fan base in Chicago—we received hundreds of letters and Facebook posts from Chicago fans asking us to open up shop there,” she says.

Chrome has been growing exponentially in the past few years. Though it’s still a small business (twelve people at the San Francisco home office and fifteen in the California factory), the company had half that amount only three years ago.

Litchfield lists three main goals upon opening a Chrome store: support their local dealers, become part of the community and throw raging parties, which they plan to do every third Thursday of the month.

In the Chrome store, even during normal business hours, loud music plays and people walk in and may walk out with a bag or with an employee to have a smoke. There is a “living room” at the back of the store, a home away from home, fully equipped with comfy chairs and magazines.

“We had our sneak preview here, and everyone was stoked,” says Lauren Hummer, the manager of the Chicago store. Hummer came from a skateboarding and snowboarding background, but when she moved to the city she rode a bike and became a part of the Chrome family. She says Chrome has a diverse crowd that can include everyone from businessmen to rockers and boarders and, especially, cyclists. “Our core customer has always been in the cycling community,” Hummer says.

The Chicago store features a design-your-own bag station, which doubles as a repair stop. Wilson says a guy with a twelve-year-old beat-up bag can come in the store and they’ll do what they can to fix it or replace the parts.

Their SPD-compatible shoe came out this year. It has a stiffer sole that allows the rider to bolt on a cleat for clip-in SPD-type pedals. The soles of the shoe have stainless steel plates, and they are made of PVC and Cordura, just like the other shoes and bags, says Hummer as she attempts to bend them. “These are bike-to-bar shoes.”

When the shoe released this year, it sold out in four weeks flat. “Footwear has been a big part of our brand growth,” says Litchfield. “With the recession, consumers continue to seek out tough, durable, products that last, which is our company mission.”

Regarding the new Chicago location, Wilson sums it up. “It’s a one-stop shop. You can come and get dressed head-to-toe—from your morning commute to riding on the streets and racing. Plus, we have killer parties and give you free beer. Who doesn’t like free beer?”