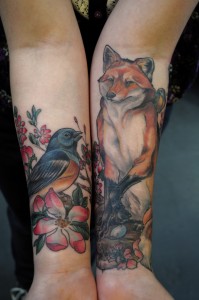 A vegan tattoo by Brian Thomas Wilson from Scapegoat Tattoo

Tattoo ink, none of which is approved by the FDA, is essentially a thinner acrylic paint made of glycerin, which is often derived from animal fat. Black ink in particular can be made with shellac, a resin secreted by a female lac bug, or carbon, often made with charred animal bone.

So, where can a good Chicago vegan get inked? A quick Google search for “vegan tattoo Chicago” brings up few results other than message boards asking the same question. One directs readers to Patrick Cornolo, who runs Speakeasy Custom Tattoo in Wicker Park.

But Cornolo stopped using vegan ink not too long after he first experimented with it five or six years ago. He still gets a few emails a month requesting it, but says he didn’t like the results he got with the set of vegan ink he tested.

“My only problem was the consistency; it’s a little bit thicker. My job is to put the stuff in efficiently and quickly so it heals properly,” he explains. The ink was thicker than he was used to, and thus had to be handled more slowly. “Since I’m not a vegan myself it wasn’t a big priority—I wasn’t going to compromise my technique.”

How it looks, Cornolo says, is far more important. “It should last forever, and it seemed like across the board all the colors I tried, they were difficult to get even. A lot just didn’t heal well and needed to be touched up.”

Vegan ink is a little more popular in places like Brooklyn and Portland, Oregon, where Brian Thomas Wilson runs an all-vegan tattoo parlor called Scapegoat Tattoo. A vegan himself, he didn’t have the same trouble with finding an ink he liked. Furthermore, he says that most inks are vegan these days anyway, made with glycerin from vegetable fats. “Every single person I’ve talked to in pigment manufacturing has said it’s all vegetable.”

The two ink supply shops in the Chicago area are both owned by International Tattoo Supply, which says it doesn’t carry any specifically vegan ink. But Wilson says many tattoo artists might be hesitant to assert that their ink is vegan, because they don’t know for sure. It’s easier to lose a customer than deal with an irate client with a permanent reminder that animal products are hard to avoid.

And it’s hard to separate myth and fact when it comes down to what is or isn’t in an ink. The woman who answers the phone at Chicago Tattooing and Piercing Co. on Belmont quickly answers that there’s no such thing as vegan ink. One of their tattoo artists, Nick Colella, says a couple people a year come in looking for vegan ink, and he tells them all the same thing: “I don’t know. I don’t know if they are, I don’t know if they’re not.”

Though there seems to be a niche market for it, unless the tattoo artist happens to be a vegan themselves, the final result is more important than what could or could not be in the ink. Many are protective of their trade secrets, and won’t talk specifics about their inks.

“I don’t buy any ink that specifically is or isn’t vegan friendly,” Colella says. “I buy ink according to how well it’s lasted for the last fifty or sixty years.” (Shaunacy Ferro)