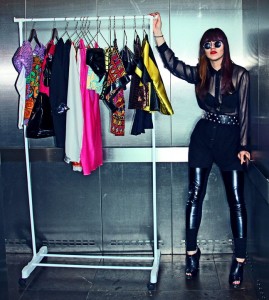 Gordana Rasic is a woman of contrast. She is a premed student with a double major in molecular & cellular biology and anthropology, and minors in chemistry and LGBT queer studies. She holds staff positions in cultural and fashion clubs and works a job shadowing medical students. And in her spare time, she designs her autumn/winter collection of women’s clothing and promotes her spring/summer line in Chicago. She is the head designer of Goca Designs, the fashion line she founded in November 2010 at the age of 20.

Rasic says she enjoys medicine and fashion for a common reason: She likes solving puzzles. When using critical analysis for diagnosis in the medical field or for any area of science, there is a puzzle present. “When I’m sewing, I refuse to use patterns,” Rasic says. To her, the material is one big puzzle.

Rasic is self-taught, but has always been involved in a wide range of the arts, from painting to acting, from singing to dancing. “The whole realm of the art world is a passion of mine,” Rasic says. It was not until her sophomore year at the University of Illinois at Urbana-Champaign, where she will be a senior this fall, that she decided she wanted to make things that were both in fashion and affordable.

More importantly, however, Rasic’s clothing has meaning. She says many designers these days design for aesthetics, while she and a few others design for artistic integrity and unveil a message.

Her spring/summer collection features bright colors and inspirations from Nabokov’s “Lolita”—the cuts originate from children’s clothing but are adapted for a woman’s style. “My key message was that as we all entered adulthood, we had to put our imaginations on the backburner,” she says. “The collection overall shows the progression from day to night looks, but conveys the message that despite the location, time or personality, we are all capable of preserving our imagination, and finally, embodying it. 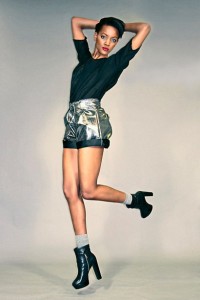 “When I was originally creating the designs, I had a lot of difficulty letting myself go. In efforts of going down the medical route and having a job, I’ve really neglected my artistic side and the action of dreaming. I feel like a lot of people can relate. I wanted them to dream just like I did,” Rasic says.

When Rasic’s friend and fashion colleague Leah Sammak heard about Rasic working on her first line, she was excited but skeptical. Sammak thought balancing her workload and creating a fashion collection would be tough. “Honestly though, I was really, really impressed,” Sammak says. “When it all came together, it blew me away. Her line is whimsical and fun. It’s full of color, and it’s definitely not understated. She has some of the same elements that Betsey Johnson has in her lines but tweaked in her own way. All her pieces fit together well and she definitely has a style of her own that won’t just blend in.”

Rasic funds herself completely in her fashion endeavors. Although they believe her artistic work is good, her family focuses more on her medical pursuits. When describing the Serbian culture of her family, Rasic says, “If you’ve seen ‘My Big Fat Greek Wedding,’ it’s pretty much like that.” She says her fashion interest has been an obstacle because with many European families if it’s not science then it’s not a stable career choice.

Rasic’s family life has been challenging in the past months. She has lost three grandparents since Fall 2010. Even more recently, Rasic’s father has been diagnosed with bone cancer. “He’ll pull through—he’s a strong man,” she says.

Her ability to get so much done can be, at least in part, credited to her father. Rasic quotes her father’s philosophy that he has told her since she was a child: “For every minute you spend sleeping, that’s an extra minute someone else is using to get ahead of you.”So Rasic doesn’t sleep.

Restless nights seem to be paying off. Since founding Goca in 2010, it has been in three student fashion shows on her college campus. This summer, it made its Chicago debut at the RAW Artists: Interactive Showcase in June, debuting mostly pieces Rasic made the night before in order to show new things to her audience. Rasic has also been featured in several blogs and will be featured in two different college magazine publications this fall, one as the cover girl.

This summer, Goca Designs will be featured at The Fashion Market, 216 South Jefferson. The Fashion Market, a new place for showcasing up-and-coming Chicago designers and artists, will kick off on July 22 with a fashion show featuring several artists, including Goca. At least part of Rasic’s Autumn/Winter 2011 line will then be on display there for as long as Rasic wants, says Patsy Campbell, owner of The Fashion Market. Campbell says she wants to feature new artists that are working creatively on new fashion, new ideas and edgier designs. “I believe in not asking people to fit into a box,” Campbell says.

“This next one will introduce Goca formally to Chicago—a revamping of what we call runway. It will introduce the new union of performance art and fashion design,” Rasic says. The most Rasic will say for her next line is a hint: “In the next collection, I’m going to commit a murder for the masses, and everyone’s invited to this public funeral.” 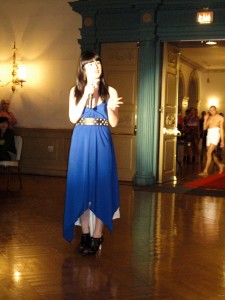 Sammak says, “Gordana is, in all sincerity, the most ambitious and hardworking student I know. She is completely the opposite of lazy—she can probably outrun the Energizer Bunny. She has the potential to really make it, especially because on top of that she is actually really talented.

“Gordana will probably become some top neurosurgeon by day and a fabulous brand name designer by night. I’m not even kidding—it will happen,” Sammak says.

For Rasic, Goca continues to reflect the duality of her life. Goca is originally a Serbian nickname for Gordana. It can be pronounced “Goat-zah” or “Go-kah.” This ambiguity of pronunciation reflects Goca’s philosophy. “Nothing is for certain,” Rasic says. “Nothing is correct, nor is it wrong. It just varies upon each individual and their perception of the world. And I love that.”