by Brian Hieggelke
August 9, 2011Filed under: 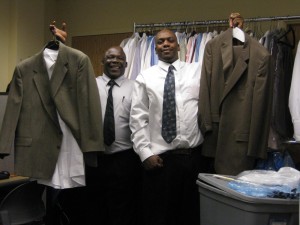 Fourteen half-naked men roamed the streets of Chicago last week trying to take your suits. Men’s Wearhouse used the day of debt-ceiling talk specifically to highlight the problem of unemployment and promote its month-long National Suit Drive by sending out models cloaked only in boxers and armed with signs asking the public to “Give the Suit Off Your Back.” “Utilizing these visual tools is a lighthearted approach to bringing attention to such a serious issue, ” says Julie Town, director of corporate giving at Men’s Wearhouse. The suits provide a key element of beating unemployment: having something to wear to interviews. Although the suit drive happens at locations all over the U.S. throughout the month of August, only select cities hosted the promotional event.

This year is the fourth year Men’s Wearhouse ran the National Suit Drive, and the results have been promising in Chicago so far. After the first two days, more than 300 items had been collected. Last year’s one-month stretch yielded 20,276 suits (more than 88,000 items total), which Men’s Wearhouse then multiplied by giving an equal number of new dress shirts to more than 200 nonprofit partner organizations. “There is still plenty of time to give suits,” says Sarah Sheppard, part of the public relations staff at Men’s Wearhouse. “It is a national campaign but it has a local impact—when people in Chicago donate, they’re going to help someone else in their own city.” (Sarah Alo)