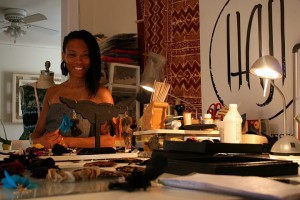 It’s hard to walk into any store lately and not see something with feathers. The trend has lasted for more years than expected, trickling from haute couture down to the lowest prices at chain accessories shops. One of the designers at the heart of the trend in Chicago is jewelry designer Aya-Nikole Cook of her brand Haji Couture. Since 2007, Cook has been crafting works of art to adorn women’s ears with feather jewelry. After a rocket to success at the beginning, she’s on hiatus for the past year, hardly stocking in-store and closing her Etsy site. This summer, however, she’s working on a comeback and an answer to the fake feather takeover.

Cook’s designs are all handmade and Haji Couture’s staff is at a lonely number one. Cook does all the work on every piece she creates, and the work is intricate and unique—designing, trimming, handpicking and assembling. And she uses real feathers.

In her first year, Cook received a lot of attention. She was getting a flood of requests for custom work, press from the likes of  the Today Show and selling in Chicago and New York. “It was a whirlwind I was not at all prepared for,” Cook says. 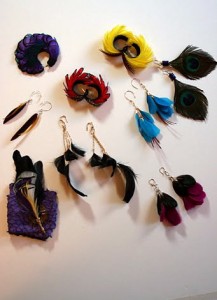 Still, she has maintained twenty-five to thirty-five regular clients for custom orders even while on hiatus.

Over the past year, Cook has been re-centering herself. She is now a certified yoga teacher at Chaturanga Holistic Fitness in Hyde Park as well as at Moksha Yoga Center in Lakeview. She has a 13-year-old son and a job as student assistant to renowned artist Kerry James Marshall. Haji has been on the backburner but still present nonetheless.

Now, she’s bringing it back to the forefront. She is considering hiring people to learn how the designs are made to carry part of the workload so she can produce more jewelry more efficiently and expand into additional stores. She also reopened her Etsy site in June, is creating more new styles, and is restocking her supply sold at The Silver Room, 1442 North Milwaukee, in Wicker Park.

The Silver Room’s owner, Eric Williams, says people love Haji because it’s handmade, it’s different and it uses interesting materials. “People who like it are very fashion forward,” he says.

At the beginning of Haji, the feather trend was just taking flight, but now that it’s soaring, copycats have surfaced. One in particular Cook is dealing with now is a Malaysian company that not only sells obvious knockoffs of her designs, but even uses her pictures from her website to do it. Cook and many of her friends who are designers have encountered these situations. “All an artist can do in reaction is just keep creating,” Cook says.

One of the customers who helped Cook at the start was Chandra Hartman. When they met at a GenArt show in Union Station, no one was really doing feathers and Hartman says Haji was and is eclectic but with impeccable craftsmanship. She bought a pair of earrings that day, ordered another and convinced Cook to bring Haji to the Big Apple. “There was just absolutely no way that they would turn Haji down. She has no equal when it comes to her design,” Hartman says. 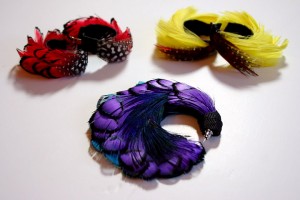 The pair arrived at Henri Bendel in New York for Open-See, an open call designer day, at 3 o’clock in the morning, and Haji was fourth in line. The doors opened at 9am, and Cook had a “yes” by 9:15. Haji sold there for two years.

For now, Cook is all about balance. She wants to continue teaching yoga and expand Haji. Both, she says, are meditative processes for her. They have meaning beyond the surface to her personally, and have meaning to her clients.

On the surface level, Hartman says there’s no better time for the exclusive luxury version of the feather trend. Consumers can walk into many stores and find different levels of similar designs, but the mass-produced version “will never be able to compare to Haji,” she says.

“I’m taking this eternal age-old material and making it modern and interesting and sexy,” Cook says. She wants women to adorn themselves with feathers and “inspire women to be fully who they are or who they want to be,” she says.

“People who know it missed Haji and people who haven’t seen it will be pleasantly surprised,” Hartman says.