by Brian Hieggelke
January 30, 2012Filed under: 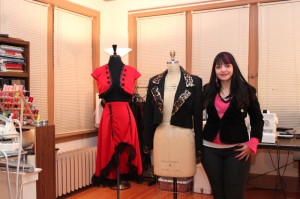 Last basketball season, local Chicago designer Wanda Cobar was part of a collaborative design effort to create oversized Bulls jerseys for the lions outside the Art Institute. The idea was that the lions would wear the jerseys when the Bulls won the championship, looking stately yet sporty in the midst of the inevitable celebration. Needless to say, the jerseys went unworn, stashed in someone’s studio closet, sad and abandoned.

Almost a year later, however, Wanda is getting more of a return on her designing efforts, even if her costumes are made solely for stripping off. Currently she is designing costumes for “El Mari Chi Chi,” a burlesque theater production directed by Jonald Reyes, to be performed at the Gorilla Tango theatre in Bucktown. Gorilla Tango—the “Geek Girl Burlesque”—is known for adapting nerdy material into burlesque shows, making for a show that’s both sexy and hilarious. 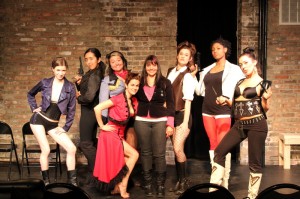 If burlesque dancing is a carefully choreographed and learned art, so is designing costumes for the burlesque dancers. “El Mari Chi Chi” is based on Robert Rodriguez’s 1995 film “Desperado,” and the title is a play on its prequel, “El Mariachi”—“mari chi chi” being the Gorilla Tango-dubbed female counterpart. Cobar took much of her inspiration from the film, retaining the general idea of the characters’ costumes and then upping the sex appeal and transforming them into pieces fit for a burlesque.

“I’m a huge fan of everything that sparkles,” she says. “In the movie, obviously nothing sparkles. But I used a lot of sequins, and bedazzled things. And anything that stretches for movement is the best and easiest to fit.”

Cobar, who has a degree in Fashion Merchandising from Northwestern College, designed costumes for a comedy troupe Jonald was involved with two years ago, and he asked her back for his new theater production.

Designing and fitting costumes for a burlesque show has been more up-close-and-personal than fitting jerseys for giant iron lions.

“I’m a big fan of corsets and comedy,” Cobar says, laughing. “I actually took a course in corset-making, and I was excited to have the opportunity to use the skills I learned. But then I realized I had to make some changes… because the girls are stripping. They’re taking things off.”

The fact that the clothes are meant to be stripped off onstage poses certain challenges to designing. For instance, zippers need to be added to corsets to make for quick and easy removal. Not only that, but Cobar has to be sure details like zippers can be incorporated into the choreography and don’t catch on skin. Watching a burlesque dancer trying to find and tug down her zipper is just clunky. “Every little thing counts,” says Cobar. 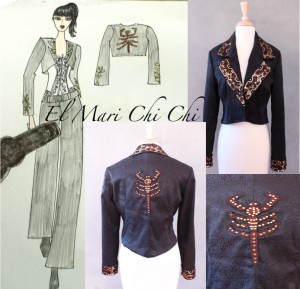 But Gorilla Tango isn’t “just” burlesque, and so too the costumes Cobar designs must reflect the original content. “I wanted to keep the mariachi feel,” Cobar says. “So instead of jeans I used a stretch denim fabric. Instead of knives I used a shiny aluminum stencil fabric. The dancer has to be covered and not covered at the same time, and I don’t want the costume to take attention away from her body and her role.”

When asked whether she would ever consider being in a burlesque show herself or wearing one of her own risqué costumes, Cobar smiles.

“I’ve thought about it, and it does seem really cool.  And I do like sparkly stuff! But in public… I don’t know! In the end, I’ll just let the girls that are talented in that do their thing.”