by Brian Hieggelke
February 1, 2012Filed under: 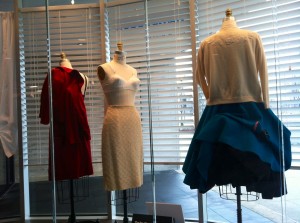 Walking south on Michigan Avenue, past a set of tall, greenish windows that flash and reflect the chaos of the street, you may feel inexplicably like a peeping Tom. But if you turn to face the windows at 618 South Michigan, and peer past the wooden-slat blinds, you’ll realize why:  A number of mannequins in various states of undress, their bras and girdles and stockings peeking out from clothing half on and half off, make up the exhibit “Undressed: Women’s Unmentionables of the 1950s and 60s,” put on by Columbia College Chicago and the Historical Society of Oak Park and River Forest. Most of the garments come from Columbia’s extensive fashion study collection, a teaching resource that includes more than 6,000 diverse pieces. As is evident by their display on this busy stretch of Michigan Avenue, these undergarments are no longer unmentionable.

“Really, the way the exhibit got started was that we needed a way to display some of our garments without too much exposure or light damage,” says Sarah Levi, the show’s curator.  “So we chose the undergarments, and by using the blinds we can give it that peep-show feel and also protect the items from damage.”

Displaying women’s undergarments from the fifties and sixties is more than just a peep show. It opens up the can of worms related to women’s social issues during these decades, and the half-dressed or undressed state of the mannequins displayed proudly in the window speaks to women’s liberation.

“These were times where women’s roles in society were changing,” says Kendra Hay, who is producing the exhibit. “The show addresses a more historically significant aspect of women’s garments.”

Putting vintage undergarments on display in full-length windows on a major avenue goes directly against the chaste homemaker ideals valuable to women’s gender roles in the fifties. That decade saw the popularization of A-line and poodle skirts. The occasional glimpse of a lacy petticoat from the lip of a skirt was about as risqué as it got. In the “Undressed” exhibit, a mannequin stands with its poodle skirt hiked up in the back and pinned, showing off a poofy black petticoat the way a proper lady never would. Next to it, a shirtless mannequin sports a brash, conical bullet bra.

Along with protecting the garments from light and creating the peep-show feel, the blinds in the windows also encourage passersby to actively engage with the display. Walking past, the blinds are open enough to let you see underwear, but you have to walk up close to take it in fully. On the building, a sign explains the exhibit as a “glimpse at the sometimes provocative, often uncomfortable, and always intriguing under layers…worn by women during a time of rapid change in fashion.” (Francesca Thompson)

“Undressed” is in the lobby of 618 South Michigan at Columbia College through March 1.