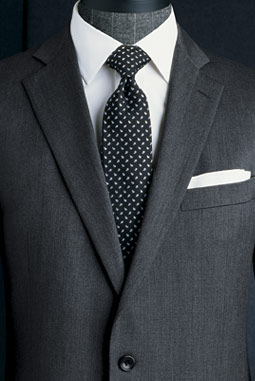 A customer I was bagging groceries for asked, “Are you guys wearing your aprons the week of the summit?”

Perhaps she’d read the Crain’s Chicago Business article entitled “What not to wear during the NATO summit,” in which Ryan Ori writes, “downtown workers may experience casual Friday and casual Monday,” because the goal is to blend into the protesting crowd and appear as neutral as possible. In fact, Ori writes that through this small change, corporate employees will “avoid being targeted by protesters during the meeting of world leaders May 20 and 21,”  so long as they “set aside suits, ties and anything with corporate logos.”

“I don’t think anything is changing here. Not that I know of, anyway,” I responded and finished neatly stacking her groceries in her bag.

“Yeah,” she responded, “Well, I’m just so glad I’ll be out of town that weekend. I don’t want to have to stress about what I have to wear to be safe on the streets. Have a great weekend, guys, thanks,” she gleamed at us and clicked away toward the door in her high heels.

In Crain’s, one reader commented, “This NATO G8 thing has gotten too goofy. Maybe the city should make… buttons that have the word ‘protestor’ and a big red line going through. Anyone who doesn’t want to be bothered by protestors can just wear the button then they don’t need to go out [and] buy a protestor costume. Geez!”

Another wrote, “While it’s always good to use common sense, [let’s] not get carried away. Not every Brooks Brothers wearing person, and not every protestor is some low life wanting what you have.”

Matt Camp, a contributor to the Occupied Chicago Tribune who will be joining protestors downtown for the NATO summit, says, “The corporate caveat to dress down on NATO weekend is absurd. Those of us who are planning on protesting the NATO summit have been insistent upon a nonviolent approach to our activism. This is nothing more than a half-baked attempt to smear protestors as violent and irrational.  Yes, we do have our qualm with the system, but unlike the state that confuses corporations with people, we recognize the difference between the two. Our issue here is with NATO and imperialism, not white collar-workers trying to hack it downtown.”

I guess I’ll be wearing my apron. (Desiree Cole)