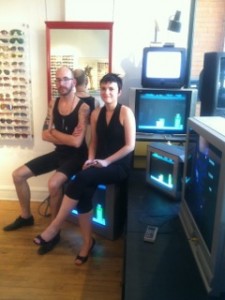 Coyote DeGroot, the owner of Labrabbit Optics, an eyewear boutique on Ashland, threw a party on Saturday, May 19, because, as he puts it, “Why not?” His business started out as an offhand enterprise as well, beginning in his apartment three years ago. A few friends came to him for frames and lenses, telling other friends and coworkers to go to him for great eyewear as well. Soon, DeGroot had a business and he opened Labrabbit Optics a year and a half ago to deal in vintage and exclusive modern frames.

On this particularly warm Saturday night, DeGroot opened the doors to have his second annual open house. The store and sidewalk filled with people drinking and discussing the NATO summit as well as which frames would look best on each other. 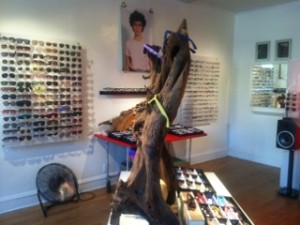 Those not trying on glasses could be found playing the videogames that are part of “Hacked Memories,” an art installation in the shop’s window. Recent Columbia College grad Maria Tzeka’s installation features television screens facing both inside and out. Dismantled and re-imagined forms of Mario and Pac-Man race across screens, their iconic images replaced by the numbers that make up each game’s programs.

“Without the scores and identifiable characters, you’re left without the competition and can appreciate the experience more,” Maria tells me while playing a deconstructed game of Tetris.

DeGroot likes to give back to artists as much as possible. “Here,” he says, “an artist will get more street level exposure than they would ever get in a gallery.”

Outside, a food truck arrives and DeGroot grins and claps his hands. The white truck positions itself in front of the store. A band of pulsing blue LED lights wraps around the top of the truck. Out pops a man in a Mexican wrestling mask. A smaller man in a matching mask sticks his head out the back of the truck to judge the distance to the car parked behind them. They are the Tamalli Space Charros Collective. 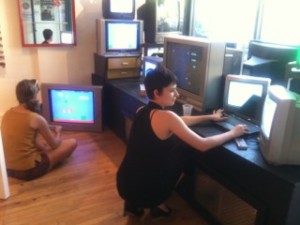 “Have you heard of them before?” DeGroot asks after talking to the driver. “They’re inspired by Mexico’s stridentist movement and Mexican wrestling sci-fi films.” The stridentist movement began after the revolution and was an avant-garde movement created in response to the politics of the time. The TSCC motto: It is no longer possible to remain on the conventional corners of Mexican cuisine. Their tamales are excellent.

The party is in full swing and the night is finally starting to cool off. It is a great night for a party. Why not, indeed. (Nikki Dolson)