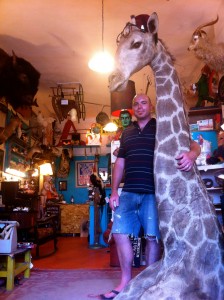 When Adam Rust and his wife Skye opened Woolly Mammoth Antiques a couple of years ago, they had vintage clothes, shoes, purses, couches and coffee tables. The couple thought they were going to focus on midcentury antiques. But they started buying what they liked, what really caught their eye: taxidermied animals; animal teeth; frogs preserved in a jar.

Adam and Skye find the unusual goods they sell all over the country. “It’s almost all out of state, in the Midwest. In March, we went as far out as New Jersey. Next week, we’re driving out West, so we could go as far as Washington, but for sure as far as Glacier National Park. We camp along the way to find stuff and bring it back. Last week, we went to three auctions, but it’s mostly private collections.”

“A friend of a friend’s uncle was a retired taxidermist in Iowa and was looking to get rid of everything. That was a good resource for a year or so. We’d drive out there often and literally crawl around his barns and attics to find all kinds of skulls of bones. He was a really good taxidermist and had some really amazing pieces.

“Another time, there was this guy in the city who came in one day and told us he had some really interesting stuff. We decided to go over and check out his house, and every wall space was covered with a collectible crucifix or some type of monster movie culture. It was like this three-bedroom apartment. His walls were covered with these lizards, and one of his bedrooms was completely devoted to these rare species of armadillo lizards that he raised in his apartment on the third floor. His place didn’t smell or anything. He was really tidy and he was a really nice guy, so we bought a ton of stuff from him.” 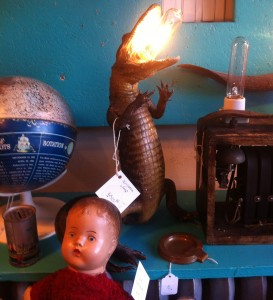 Adam says that people will come in often and say they have a bunch of vintage models, so he and Skye will go to their house and see what they have. “The problem is, when people reach out to us, a lot of the time, it’s stuff we’re not really looking for. I’d say we buy less than two percent of the stuff actually in here,” he says. “Most of the people who come in here with things don’t see our aesthetic or have our eye for things that we want.”

Adam points to a large buffalo head hanging above us on the wall behind me. “I bought that buffalo off a guy who pulled up in a pickup truck one day, and he had that thing in the back of his truck. He was a carpenter and he had done a job awhile back and the guy didn’t have enough money to pay. And the guy had that thing, and the carpenter took that as a payment.”

Adam walks around the store, picking up small reptile skulls, and pointing out larger specimens, sharing how the animals made their way to the shop.

“Like this zebra, he was struck by lightning in a zoo in Iowa, so that’s how he died. So we bought it from a guy who actually stuffed him afterward. That muskrat hanging above your head was actually roadkill,” Adam points out. The muskrat looks flawless—Adam and Skye do a lot of the repair and rebuilding themselves.

“You see that little green-velvet-suit guy up there? That’s a Chicago-based story. That’s an animatronic window display model. It’s from the old Marshall Field’s store downtown, so his arms actually go up and down and his head goes from side to side, and he was a Charles Dickens character for “A Christmas Carol.” We found him from a private collector. It was in shambles though when we got it, one arm and one hand were missing, and the legs weren’t even attached.” 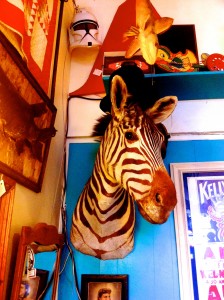 Adam put his arm around the giraffe that greets people when they first walk into their store. “We call this guy Sir Necklace. He brings people in.”

With the giraffe’s small top hat and sunglasses on his head, Adam says, “Putting humor into the items in this shop are the only way I know how to do this. Even before I did the shop, I was a full-time cartoonist, so I’ve always done something with a funny sense.”