by Brian Hieggelke
October 25, 2012Filed under:

It’s a quarter to noon on an unseasonably warm Thursday in October, and Lori Lindberg, owner and buyer at Clothes Optional Vintage in East Lakeview, is in high gear. The Classic Vinyl station (on Sirius FM Satellite) is cranked up, spinning tunes by Deep Purple, Joe Cocker and Led Zeppelin (all her favorites), and she’s sipping on a skim latte from Caribou, in between chatting with this curious journalist, fielding calls and tending to customers. Dressed funky chic—Lucky Brand tight-fitting jeans, blue-and-brown cowboy boots, a lacey black tank top and a zebra-striped hooded sweatshirt, her long dark hair tied back in a braid, Lindberg is an eternal child of the seventies, with a friendly openness and passion for do-it-yourself fashion, art and music that feels, well, a bit Joplin-esque.

Janis Joplin created her plain yet sensual look by piecing together clothing and accessories from thrift stores, she sewed and designed many of her own costumes, and loved to smoke and talk about “groovy” things. Lindberg doesn’t sing or perform, but she’s like Joplin in many ways: she sews and fixes up clothing (both her own stuff and pieces in the store), loves vintage, and is also quite fond of smoking, talking and hanging out. Unapologetically hip and sexy in minimal makeup and a frequent smile, Lindberg doesn’t look like the forty-eight-year-old mother of three grown daughters, let alone a grandmother. She looks like the kind of person you want to kick back with and have a beer and a good laugh.

Referring to her rocker outfit with a deep, throaty laugh, she says, “I was watching Kiss [on ‘Good Morning America’], and I got inspired.” 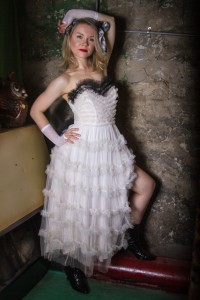 This is par for the course at Clothes Optional: talking about inspiration, about outfits, about the art shows Lindberg hosts (the latest is the Instagram photography show helmed by Myk Little, who’s launching the new 8X8 Gallery in the store’s basement on October 26), hanging out and shopping; going home with a (relatively) new skirt, top, purse or shoes (this time it’s a cherry-red leather seventies jacket) that makes me feel like a million bucks.

Little hosted his very first photography show at Clothes Optional last April, and has since seen several hundred dollars worth of sales, in addition to growing interest in his work. He explains that Clothes Optional is like Instagram, because it brings a community together. “Instagram gave us this digital gallery and now Clothes Optional has given us this physical wall to show our stuff,” Little says. “People who live in the city can support each other’s work and bring in customers looking for affordable art.”

Lindberg supplies the beer and the artists mix and mingle with vintage-clothing aficionados and other locals. Vintage furniture (such as the fifties bar with a cowhide façade) and housewares (such as cocktail glasses and wallpaper squares you can frame) are also for sale in the basement.

Being a “people person,” Lindberg enjoys the different walks of people who come to her store to see the art. “It’s a laid-back, chilled out way to meet new people,” Lindberg says.

Lindberg confesses that she loves the decade, especially the era’s fashion. 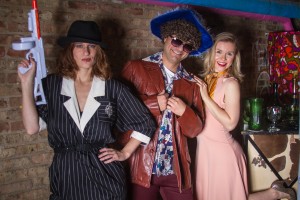 “It was an easy time,” said Lindberg. You were coming out of the sixties, when all kinds of crap was going on, but in the seventies, there wasn’t a lot to do, except hang out in basements and listen to people’s music, she says, laughing. Fashion of the time was carefree and sexy, yet understated: high-waist jeans, tailored shirts and polyester. “It wasn’t all out there,” said Lindberg.

Now, sex is in your face everyday, there is nothing shameful about it, Lindberg points out. And this comes across in today’s fashion as well. Every era has its fashion icons, Lindberg says. In her day it was Bo Derek and Farrah Fawcett, women people admired for their natural beach-beauty looks. Today’s icon is [for better or worse] reality star Kim Kardashian, Lindberg notes. Yet the idea of emulating Kardashian’s overt sexuality (or the picture-perfect look of a magazine model, for that matter) is the exact opposite of what Lindberg strives to do at Clothes Optional. She summarizes: “Sex is within you.”

What Lindberg loves about seventies fashion is the comfort factor. “I think classic pieces are always in style, and I think that it’s a sexy look,” said Lindberg. “You don’t need to bare it to be it,” she added. And that’s not to say vintage pieces aren’t also revealing, or sexy. But they are sexy in a subtle way.

In contrast to the “Sexy Show Everything” women’s Halloween costumes that are the new standard, Lindberg’s vintage create-your-own costumes recall the twentieth century in a cheeky nod to popular culture. 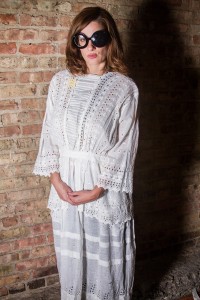 From a white-lace “Steam Punk” dress ($98), to a 1980s pinstriped jumpsuit that works as a forties gangster outfit ($16), a 1940s red “League of  Their Own Softball Player Babe” uniform ($54), a “Pretty in Pink Prom Dress” ($32), Lindberg’s costume ideas are affordable, and highly versatile. Recently featured on NBC’s local “Weekends with Whitney” TV Show, Lindberg’s costumes were noted for their “of-one-of-a-kind” factor.

Rather than the unoriginal, yet ubiquitous “Sexy Nurse” or “Sexy Catwoman” (that follow the same principle of revealing as much as possible), Lindberg’s “Pin-Up Girl Dress” ($39), a baby-blue sleeveless dress with a sailor motif, or black and burgundy, sparkly paisley “Soul Train Dancer” pantsuit  ($44), are both “hot” without overdoing it.

“It drives me nuts, when people say to me, ‘I want to be sexy seventies!’” Lindberg says. She explains: “I tell them, ‘Listen I can dress you up, but I can’t make you sexy, you have to bring it out of yourself’.”

Part of the fun of shopping at Clothes Optional is that you get the chance to be creative, and at the same time, be assisted by a vintage fashion expert. To create the guys’  “Seventies Pimp” look, Lindberg dresses the model in a polyester shirt with the trademark wide collar, along with a brown leather jacket, a curly wig (new) and floppy hat. Harvey Keitel from “Taxi Driver” or Mr. Furley from “Three’s Company”—both work!  Lindberg’s mixture of new and recycled clothing and accessories provide a range of options for dressing you up in the twentieth-century character of your dreams.

One reason Lindberg loves vintage is because it’s better constructed than today’s clothing. “If it’s still around after thirty, forty, fifty years later, it was made pretty well, wasn’t it?” she says. Nowadays, clothing barely makes it through a year, she notes. Another aspect of the vintage appeal is that nothing really goes out of style. “Everything comes back,” Lindberg says. She likes how you can pull something from years gone by and update it.

Various clothing pieces I bought from Clothes Optional in recent months gave my wardrobe a boost. There was the sixties red wool pencil skirt that I wore with a secretary blouse from American Apparel, both to work and on a film shoot; a 1950s black skirt with a flower pattern I paired with a red lacey top; and a seventies white halter top and J. Crew denim pencil skirt I wore over the summer. The outfits turned heads, and resulted in compliments. The reason: classic simplicity, which never goes out of style. 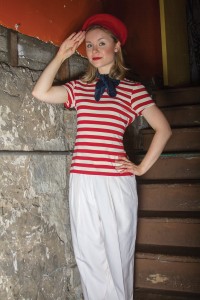 Sometimes people are afraid of vintage, observes Lindberg, because they think it’s all or nothing. Yet it’s the mash-up between classic and contemporary (mixing vintage pieces with existing clothing in your wardrobe) that creates an uncommon look.

She offers advice for customers looking to amp up their wardrobe. For women: “Start with the basics, such as a skirt, or pants,” Lindberg says. “Skirts are the best way, because that way you start with a solid, and pair different patterns with that.” Clothing options include a long or short skirt—cute polyester or a secretary look. Or if you have something in the closet, says Lindberg, bring it in to mix and match and try different styles.

For the guys, Lindberg suggests starting with jeans. “You can go for a dress shirt or a sweater with pearl snaps, or consider a work shirt, and put a vest over it,” she says.

Fall is a great time to layer up, says Lindberg. “You can wear a sweater and still have a cute look on underneath,” she says. She explains that shopping in fall is all about investing for the winter. And with the economy being so crappy, people are going to vintage stores to find different looks, she says. “Everyone has that key piece in their closet, and maybe you are tired of it, so bring it in and pair it with something vintage,” she says. That way, you’re not full-out vintage; but you have that unique look, explains Lindberg.

Fall trends include houndstooth, flowing clothes and warm colors, such as orange, says Lindberg. All of which can easily be paired with eye-catching vintage pieces.

All clothing items at Lindberg’s shop are hand-picked by the lady herself. She collects items through a mix of buying and trading with a network of clients, and only sells things that are in good shape. She points out that Clothes Optional is not a thrift store. Tops range between $8-$14, skirts are $12-$16, the pants run from $8-$20. Jackets cost $30- $60, and sport coats are $20.

“It’s a low-cost way to supplement your wardrobe and make your look stand out,” says Lindberg. At the end of the day, her goal is for customers to feel good about themselves. “I’m pretty honest, I’m not going to let people walk out looking goofy,” she says.

Lindberg says that her background in retail trained her in making sure people get what they want. Prior to purchasing Clothes Optional from its original owner (Jamie Issler, who founded the store and ran it for seven years) in May 2010, she worked as a store manager at Lucky Brand in Northbrook for two years. Yet she’s not pushy. If she doesn’t have what you’re looking for, Lindberg will send you somewhere that does. “That’s the person I am—I’m not just trying to sell you something, I am here to help you,” she says. 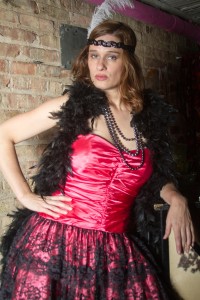 And that’s what Lindberg loves most—the art of conversation with people. “You can’t help people if you don’t find out any information about them,” she says. Retail has changed in the new economy, she continues. Ten years ago, when you walked into a store, there were two or three people there to help. Now it’s down to one or two people. “I think everyone feels a void in stores today,” Lindberg says.

At Clothes Optional, where the rock music spins, an eclectic assortment of customers pop in (during this interview, several members of Big John Bates, the notorious Vancouver “dark Americana” band, and two wardrobe stylists from the set of “Dhoom 3”) and Lindberg has a ball chatting up and helping customers. The retail void is nowhere to be found in this bright and cheerful store.

“There’s barely been a day, in the last two years, that I didn’t want to come in,” says Lindberg. She meets the “best people” every day. One of her favorite run-ins was Billie Joe Armstrong from Green Day, who stopped by after Lollapalooza two years ago, wife and band in tow. “But my best customers are the everyday people,” says Lindberg.

Singer and guitarist John Bates is pleased with the faded black shirt with gold cowboy stitching he plans to wear onstage at his next performance. Wife and co-singer/bass player Brandy Bones scores with a pair of sparkly gold-and-black leggings and short black cotton jacket. Dressed in a black leather motorcycle jacket, black jeans and Doc Martens, with a black fifties vintage handbag on her wrist, Bones is a walking advertisement for the fetching combination of vintage meets contemporary. Bates observes that good American vintage is hard to find nowadays, due to the Japanese buying it up by the carload and shipping it overseas. “But sometimes, I get lucky,” he says with a grin.