by Brian Hieggelke
October 25, 2012Filed under: 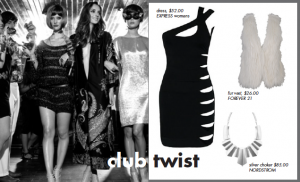 The unanswered question returns: What’s R&B without the R? Only this time around, the answer is more vague than before. What does the “R” stand for? R. Kelly—the Chicago-based crooner who posed the question to reassert his dominance as the king of modern soul music? (For the record, R. Kelly defends the title with three Grammy Awards, six number-one albums, six Billboard Music Awards and six American Music Awards, to name a few). Rhythm? The songs off his eleventh studio album “Write Me Back” sure have a melodic measure to them that incites listeners to two-step. Real? Despite the modern craze to auto-tune articulation and add studio-synthesized voices to hip-hop tracks, R. Kelly aims to celebrate R&B, crediting its singing as a traditional, talented art form. Retro? With influences such as Bill Withers, Stevie Wonder, Ray Charles, Barry White, Marvin Gaye and Teddy Pendergrass, the tracks on R. Kelly’s eleventh studio album “Write Me Back” harness that smooth grooves and funk inspiration of the Motown-era musicians.

Expressing a rekindled appreciation of music ranging from the 1950s-1970s, “Write Me Back” is a follow-up to “Love Letter,” Kelly’s 2010 album that commended the music of the 1950s and sixties. In honor of his rich reflection of the past, and with Halloween fast approaching, concertgoers can dress festively for the event by taking their wardrobe back in time.

Emulating the styles and dress of performers like Smokey Robinson and the Isley Brothers, who influenced the sounds of his latest CD, men can dress the part by donning suit jackets and bling. Mocking the style of the Motown-era performers, old tuxedo jackets, black satin blazers and black jeans would be an appropriate way to give a nod to the fashion sense of preceding decades. A blazer pulled over a black t-shirt paired with dark jeans is a modern twist on an old trend; another way to modernize the former trend is to sport a blazer with leather accents, updating the satin lapel look of the 1960s.  An Isley Brothers-inspired outfit that is destined to turn heads is a chocolate brown tux. 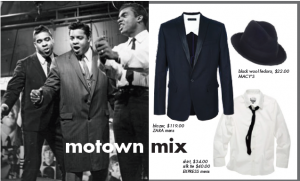 If you don’t feel like riding too far back in the time machine, and think a full-blown tuxedo is too fancy for an R. Kelly concert, mix elements of a tuxedo with modern staples. A tuxedo shirt with dark denim is a passable pairing. A clean, crisp outfit is to mix tuxedo pants with a white shirt and tie the outfit together (literally) with a skinny tie or bowtie. For an updated version of the tuxedo outfit, wear a blazer or coat—ideally with satin lapels—with a plain basic shirt—white or black—and add your personal style with bling—anything shiny to pay homage to the stars you admire through your attire. Fur collars, a black fedora and aviator shades would complement any outfit, and turn the retro meter up a notch for a touch of class to recreate fashion from the past that R. Kelly incorporated in his music.

Ladies, don’t be scared off by thoughts of tacky seventies bell-bottoms, flared jeans and laced-up platform boots. There is nothing more classic—or timeless—than a little black dress. Cocktail dresses are a classy tribute to the decades before us. Black cocktail dresses with neck detail or interesting backs are a perfect fit for the occasion. Bodycon dresses are also reminiscent of the era and have crept back into the fashion trend realm. Blinc Boutique (1843 West North) in Wicker Park offers bodycon dresses—some black and others in bright colors with sparkles—as well as cocktail dresses. Berlin Wallace, the owner of the store,  is R. Kelly’s stylist.

For a sleek, sophisticated layer to help brave the autumn chill, bury your shoulders in a warm furry wrap. A vest with fur will also do. Any statement necklaces—especially choker necklaces—complete the glamorous club look of the 1970s. Vintage Underground (1834 West North) is a hidden gem tucked beneath street level that harbors a wide selection of fur shawls, fur wraps and statement jewelry pieces. Hundreds of gold chains of different lengths and textures hang from jewelry racks, some boasting glitzy stones and other sparkling pendants.

For extra shimmer and shine, rediscover rhinestones and add bling to your outfit; low-hanging necklaces for guys and chocker-style pieces for women. Imitate Kelly’s style in his music video for “Share My Love” by sporting rhinestone-rimmed sunglasses. Whatever you decide to wear, remember R. Kelly’s words of wisdom: “Love has the greatest vision of all time.” When you look good, you feel good, and feeling good makes you love yourself a little more. Take it from the man who delved into past decades to find inspiration for his newest twelve-track CD focused on love.