by Brian Hieggelke
October 29, 2012Filed under: 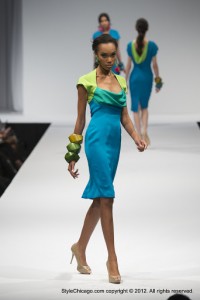 Spotted on Randolph Street: sparkles, sequins and fluffy fur shawls. The glamorous getups weren’t costumes for Halloween, but fashion-fascinated Chicagoans sure got a treat as they gathered at Millennium Park’s Chase Promenade for the Art of Fashion show. The fashion show was one of many events throughout the week as part of Fashion Focus Chicago.

The dark autumn night was offset by a soft red glow peeking through the plastic walls of the white tent. The scene was sleek: soft white couches, tall white tables just the right height to hold a cocktail, and sparkling red lights. The attendees were a group as mixed in age as they were in garb—zebra print jeans to black glittery dresses to patterned denim pants—but they were all unified by their interest in fashion.

Ten tall models with thin frames and edgy, cold stares emerged from the long pleated curtain backstage and onto the long white runway to show off the creations of the featured designers. 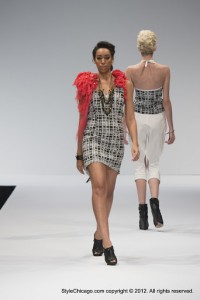 Simplicity and the classic use of black and white (with a touch of pink) define Michelle Tan’s collection. A fitted strapless top with black-and-white stitching was paired with white shorts cut in a jagged zig-zag pattern along the bottom. A sleeveless dress had zipper, centered in a thick black band, running all the way down the back. Tan added a modern twist to the basics: high-waisted black shorts were embellished with studs along the side seams to evoke an edgy, rebellious look (further emphasized by the chains the models swung on the runway while posing). The outfit that summed up Tan’s collection: a flowy, above-the-knee pink skirt, paired with a crisp white top underneath a cropped black blazer. The collection included black and white polka-dotted pieces and layers—both sewn into skirts and longer flowy layers in the back of dresses.  Also featured were black belts and bands around the waist.

Ruffles were Swaby’s big contribution to the show. White dresses with feather-like ruffles made the models look like swan princesses, without the fluff. The models seemed to sway and bounce when they walked because the ruffles swung with every step they took. The ruffles were a little much, especially the floor-length skirt portions of the dresses; one green dress looked like a stack of Post-It notes stuck to the model’s figure—but the idea of ruffles is an interesting concept for spring. Highlights include a white sleeveless top with ruffles paired with slate-grey skinny jeans. 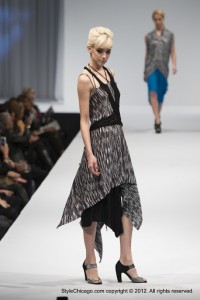 Lara Miller centered her collection on convertible pieces, wraps that can be worn as shawls, sweaters over dresses, and shirts without a collar that stretch the fabric across the shoulders instead. A model strutted down the runway wearing a blue hooded sweater and posed at the end long enough to flip the hood down into a swoop of low-hanging fabric below the neck, transforming the top into a dressier shirt. Miller also featured layers with her floor-length purple dress that has longer, trailing fabric in the back. Flouncy, sweeping fabric was a common thread in her pieces; it was seen in her black-and-white patterned dress with a longer, swiftly flowing black layer beneath it. Her spring color palette consisted mostly of green, orange and purple. 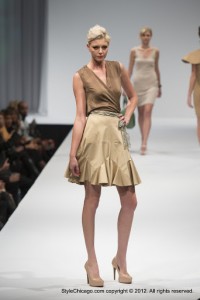 The secondary colors were popular with other designers as well. Borris Powell, the crowd favorite, incorporated light variations of orange, green and brown into his clothing. Belted dresses were popular in his set; in most cases, the top and bottom halves were two different colors separated by a skinny belt. Noteworthy pieces included a lightweight, fitted jacket that buttoned and belted paired over a body-hugging, short-sleeved dress with a green rectangle between the ribs. His collection included brown snakeskin shorts and lots of glossy animal prints. For added shine and texture, the pantsuit had a thin snakeskin border around the pockets at the waist and around the collar of the blazer. The pants had a white stripe down the leg for extra flair. Animal-print handbags were also featured.

RÜCH showcased orange dresses of varying lengths with belts. There were several dresses in the collection with a strip of pearl-like beads along the sleeves and neckline. A crowd favorite was a navy dress that had a draping neckline and a skirt with a slightly glossy pattern of perpendicularly intersecting lines on it. Other dresses had floral patterns in earth tones, such as cream, shades of light and dark greens, dark red and orange.

Models dressed in Michael Alan Stein’s collection brightly blazed a trail down the clean, pristine runway in hotly colored orange and fuchsia dresses. Stein created large, geometric bangles and big, square-shaped earrings to accessorize. One of the most interesting details in his collection was the colored lining on the inside of each dress that poked out from the sides of the dress and from the extra fabric ruffles. The color underneath the outer material added a surprising pop of color.

Shalini’s pieces concentrated on blocks of color: whether it was a sheer black neckline stitched above a solid black dress or a white top with black leather across the shoulders, the pieces mixed patches of colors and textures. The collection also featured slender dresses with slits leading up the leg in the front and back, as well as flaps of fabric to create a sense of flow. This collection had a classic, chic feel because of the gently hanging fabrics and use of black and white. 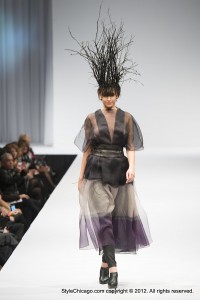 While Stein’s designs were colorful, Pazola’s line centered on black, white and grey. Some dresses had a metallic sheen. While the colors were subdued, the textures drew onlooker’s attention: all of the dresses were cut above the knee and one with netting material with tiny holes in the fabric that let skin peak through, while another black dress had little slits cut into the front that break up the black dress with a glimpse of skin. Pazola intertwined textures by including leather strips along the cuffs of the black suit. Her differentiating feature was the inclusion of a detailed collar on most dresses presented.

Nade Baer’s collection was all about glitz and glam. Every piece sparkled, twinkled and shined—with the harsh white lights gleaming down onto the pieces they almost looked like costumes. Some had extra fabric at the back or sides that made the dresses seem cape-like. The pastel colors and shimmer emitted a prom dress feel, especially because most dresses brushed against the floor as the models sauntered in the spotlight. Several dresses contained glittered embroidery or glittered belted waists. 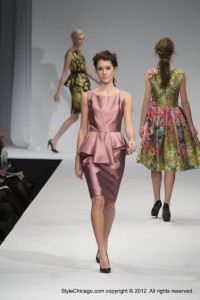 The show drew to a close after Barb Bates presented her creations. The highlights included a pink and green color scheme and dresses with three pieces of fabric draped across the waist, dipping down into the midsection. Another key piece was a floor-length, sleeveless black dress with sparkles.